While revisiting fanhistory for my Worldcon panels I began remembering some of the cool fannish things I once wished to own. Some of them I acquired. Some are still cool. One is still cool and available. 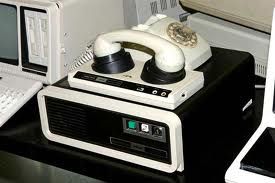 Plenty of fans in the 1970s were engineers, programmers and science grads with legitimate access to the ARPANET, the early computer network and forerunner of the internet. LASFS party hosts with accounts, of course, appreciated that the highest and best use of the system was calling into M.I.T. to let their guests play Zork.

Connecting to the net involved placing a regular phone receiver in the cradle of an acoustic coupler modem linked to the home PC. Those early modems were as big as a combat boot – the one my friends had must have been even bigger than the one in the picture, still, you get the idea.

It would have been heavenly — for some values of heaven — being able to call in and play Zork for endless hours with no other fans waiting breathlessly beside me for their turns. However, they soon clamped down on access to ARPANET accounts, and I could not have afforded however many hundred dollars that gadget cost. But it was cool! 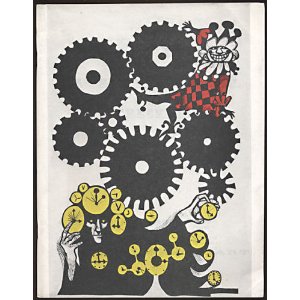 Leslie Kay Swigart had been an active LASFS member of the era right before I joined the club, which is one reason Bruce Pelz had a copy of her magnum opus, Harlan Ellison: A Bibliographical Checklist. The 1973 first edition was printed by Williams Publishing of Dallas and I don’t know if that was a publishing house or just a printer. In any event, he showed off his copy during one of the card games at his place. The intricate cover by Leo & Diane Dillon made it look awesome. (Gosh, did I just write awesome?) And bearing in mind that Harlan Ellison in 1973 was at the pinnacle of his popularity, it’s understandable why Bruce’s offer to sell us copies was irresistible. You can’t read what you don’t even know exists, and in those pre-internet days Swigart’s checklist was the simplest way of discovering everything our hero had written. 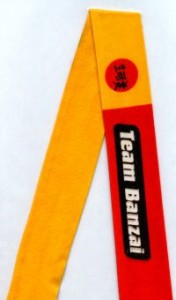 In 1984, Twentieth Century Fox hired a crew to travel around the country promoting The Adventures of Buckaroo Banzai Across the 8th Dimension at conventions. They were the only source for the Team Banzai headband. The over-the-top title and the movie’s implicit coolness struck the right note with fans, which made the headbands popular. A few did wear them as headbands, others as armbands or thighbands, or tied to some piece of fannish paraphernalia. Fans sure did like the glow-in-the-dark LA-in-90 bid t-shirt (the yellow shirt in this picture). It may have been the most appealing thing about our bid. I’ll bet plenty of fans were wearing these shirts while happily marking their ballots for Holland.

Robert Heinlein suffered two years of extensive illnesses and received many pints of his rare blood type in transfusions. He was determined to pay-it-forward, publicizing the National Rare Blood club and blood donation generally. Fans organized a blood drive at the 1976 Worldcon, MidAmericon, where he was guest of honor and Heinlein said he would only sign autographs for people who donated blood. Part of the package deal was a RAH blood donor pin (commissioned by the LASFS) and copies of his “Are You A Rare Blood” offprint which many of us had him autograph.

Commemorative Heinlein blood drives continue at conventions to this day, and unlike some of the other cool things mentioned in this article you can still get a donor pin.

9 thoughts on “Stuff That Was Once Cool”