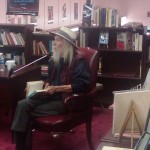 By John King Tarpinian: Saturday the First Annual Ray Bradbury Read-In was held at the Mystery and Imagination Bookshop.  The event was conceived and hosted by George Clayton Johnson.  Many fans, friends and fellow writers were in attendance.  The event started around 1:00 p.m. and ended around 8:00 p.m.  People took turns reading Ray’s short stories, poems and chapters from a few of Ray’s novels.

Opening the reading was George.  For those who don’t know who he is or his resume George wrote the original Ocean’s Eleven, Twilight Zone episodes such as “Nothing in the Dark” featuring a very young Robert Redford, and “A Game of Pool” with Jonathan Winters and Jack Klugman.  His version of “Kick the Can” was selected by Steven Spielberg for his directing of the TZ Movie.   Many people do not know this but George wrote the first ever aired Star Trek, “The Man Trap,” and coined the phrase, “He’s Dead Jim.”  With is writing partner, William F. Nolan he wrote the cult classic Logan’s Run. 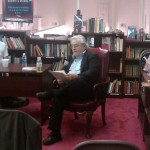 There were many members of Ray’s acting troupe, The Pandemonium Theatre Company, who read from a plethora of selections.  Many they had performed on stage before. 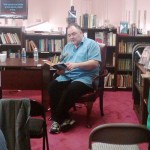 Peter Atkins, best known for his writing of the children movie series Hellraiser, read from what he said was his favorite book of all time, Something Wicked This Way Comes.

Dennis Etchison, another author of note, read his favorite story from Golden Apples of the Sun, “I See You Never.”  Dennis has won numerous writing awards and is noted for having done the novelizations of the movies, Halloween II and III plus Season of the Witch and John Carpenter’s The Fog.

This event went so well that it now is slated to be an annual event.