Not many friends of mine would want to depend on Peter Jackson’s knowledge of Tolkien to keep them out of jail, but Deadline says Jackson has left comments on social media in an attempt to help Turkish doctor Bilgin Çiftçi avoid a prison sentence for insulting his country’s president.

As reported in December 2’s Scroll, the doctor is charged with insulting President Recep Tayyip Erdogan by comparing him to Gollum in a set of photos posted to Facebook that showed them both expressing surprise and amazement, and eating. 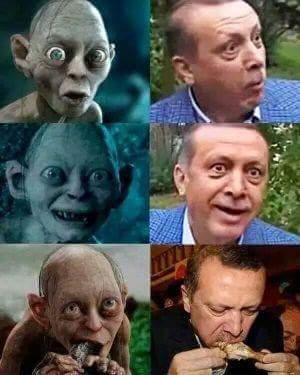 However, when challenged by defense counsel, the judge in the case admitted he had seen only parts of the movies from which the images were taken. So the judge now has appointed five Lord of the Rings experts to figure out whether this Gollum meme is offensive, according to the Istanbul newspaper Today’s Zaman.

The court ordered that the investigation be conducted by a group composed of two academics, two behavioral scientists or psychologists and an expert on cinema and television productions.

They are due to testify about their findings when court reconvenes in February.

Meanwhile, Deadline’s post “Peter Jackson Sets Turkish Court Straight On ‘Lord Of The Rings’ Lore Error” reports that the director and his screenwriters Fran Walsh and Philippa Boyens deny these are pictures of Gollum at all.

The situation is exacerbated however by the fact that the two characters are quite distinct, and the court overseeing the case mistakenly believes the image to portray Gollum, not Smeagol. Now three indisputable experts on the character who weren’t summoned to Turkey have weighed in on the matter – LOTR trilogy director Peter Jackson and his LOTR screenwriters Fran Walsh and Philippa Boyens.

The three of them have issued a statement on the matter, clearing up the confusion. “If the images [in question] are in fact the ones forming the basis of this Turkish lawsuit, we can state categorically: None of them feature the character known as Gollum. All of them are images of the character called Smeagol.”

Walsh, who is responsible for most of the scenes involving the character, went further. “Smeagol is a joyful, sweet character. Smeagol does not lie, deceive, or attempt to manipulate others. He is not evil, conniving, or malicious — these personality traits belong to Gollum, who should never be confused with Smeagol,” she said.

Because, of course, everyone understands Doctor Çiftçi only meant to compliment the president on his Smeagol-like instincts for ethical behavior.

[Thanks to Janice Gelb and John King Tarpinian for the links.]