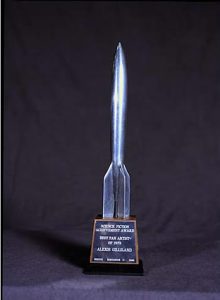 By Nicholas Whyte and Colette Fozard, Worldcon 75 Hugo Administration: Next year’s Hugo nominations will be the most complex ever, with six finalists for each award, a new tallying system, and a special category for Best Series. We are developing new software solutions for the Hugos – and we need to test them.

We are therefore looking back as well as looking forward – and we are inviting Filers to think themselves back to 1979, and the SF and Fantasy of that year, for the purpose of giving us fresh data to test the software with.

In order to avoid any confusion about the purpose of the exercise — specifically, to avert any suggestion that this might be a re-do of the 1980 Hugos — we are not pushing the 1980 Timewarp Project more widely on social media. At the same time feel free to quietly invite others to participate.

Please direct any comments or queries to [email protected]

This was, frankly, a fairly arbitrary decision. We wanted to choose a year which was not too far back in the mists of time, but also not so recent as to reopen unnecessary controversy. By fortunate coincidence, the full counting details from 1980, including the long lists, have been preserved at smofinfo.com/wsfs/Hugos/1980%20–%20Hugo%20voting%20details.pdf so we can see what fans at the time nominated. (Of course there were different categories then — the soon-to-be-abandoned Gandalf Award, only one Dramatic Presentation category, only one Professional Editor category, “Non-Fiction” rather than “Related Work”, no Graphic Story, no Semiprozine, no Fancast, no Series.)

The 1980 Timewarp Project obviously doesn’t replace or in any way invalidate the real historic 1980 Hugo nominations, final ballot or winners, least of all our gracious host here at File 770 – it just helps the Worldcon 75 Hugo administrators test the systems in advance of the 2017 nominations and vote. The Hugo Awards for 1980 were presented at Noreascon Two in Boston; those rewards remain part of history and will never be changed.

So what are you doing?

From 17 to 31 October, you are invited to make nominations for the Hugo categories under the rules for 2017, but with respect to the state of the genre and fandom of 1979. Anyone can nominate, but only electronic nominations will be accepted.

We will publish the full dataset of submitted nominations (though without submitters’ names attached) and the final Timewarp Ballot that would have emerged from those nominations if the current rules had been in force in 1980. We will not then proceed to any further vote – the Timewarp Ballot, and the dataset of nominations, are the end of the process.

Please go ahead and get your participation login at https://1980.worldcon.fi/ – comments welcome here or via the email address above.