(1)  Mystery Scene #141 has an article about Ray Bradbury – available only to subscribers. According to the Table of Contents —

Death is a Lonely Business: The Mysteries of Ray Bradbury

Surprisingly, the celebrated author of The Martian Chronicles and Dandelion Wine began his career in crime pulps and went on to write several well-received mystery novels. by Michael Mallory

Some of the magazine’s articles eventually get posted as free reads – no way of knowing if this article will be one of them. 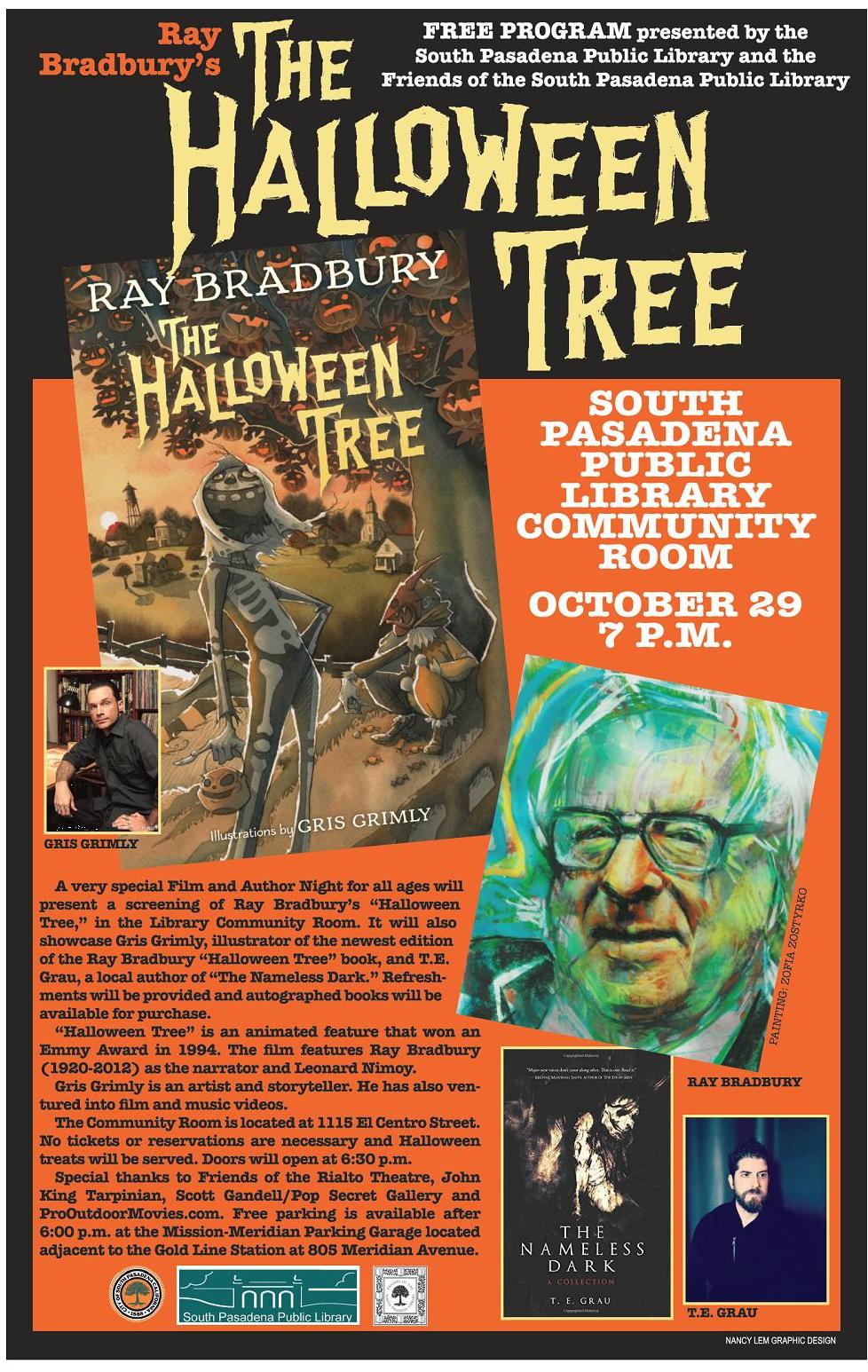 On Thursday, October 29 at 7 p.m. a very special Film and Author Night for all ages will present a screening of Ray Bradbury’s “Halloween Tree,” in the Library Community Room. It will also showcase Gris Grimly, a “mad creator” and illustrator of the newest edition of the Ray Bradbury “Halloween Tree” book, and T.E. Grau, a local author whose new book of spooky stories, “The Nameless Dark” was recently published. Refreshments will be provided and autographed books will be available for purchase.  A brief introduction to the film, with insider insights to the genesis of the film, will be offered by Robert Kerr of the Ray Bradbury Pandemonium Theatre Company.  Robert was with Ray Bradbury during his last four Halloweens on earth. The free program is presented by the South Pasadena Public Library and the Friends of the South Pasadena Public Library.

The Community Room is located at 1115 El Centro Street.

“That country where it is always turning late in the year. That country where the hills are fog and the rivers are mist; where noons go quickly, dusks and twilights linger, and midnights stay. That country composed in the main of cellars, sub-cellars, coalbins, closets, attics, and pantries faced away from the sun. That country whose people are autumn people, thinking only autumn thoughts. Whose people passing at night on the empty walks sound like rain.”  – Ray Bradbury The October Country

(4) Here is a piece of Bradbury-related Halloween trivia bordering on the obscure.

In the opening number of the Rocky Picture Horror Show, “Science Fiction – Double Feature,” sf movies are mentioned. One is It Came from Outer Space, which was based on Ray’s story.

IMDB lists all the movies named in that song —

4 thoughts on “The Bradbury Scene”