(1) PHIL NICHOLS. Fahrenheit 451 and Q & A with Phil Nichols is scheduled this month in Wolverhampton in the UK. 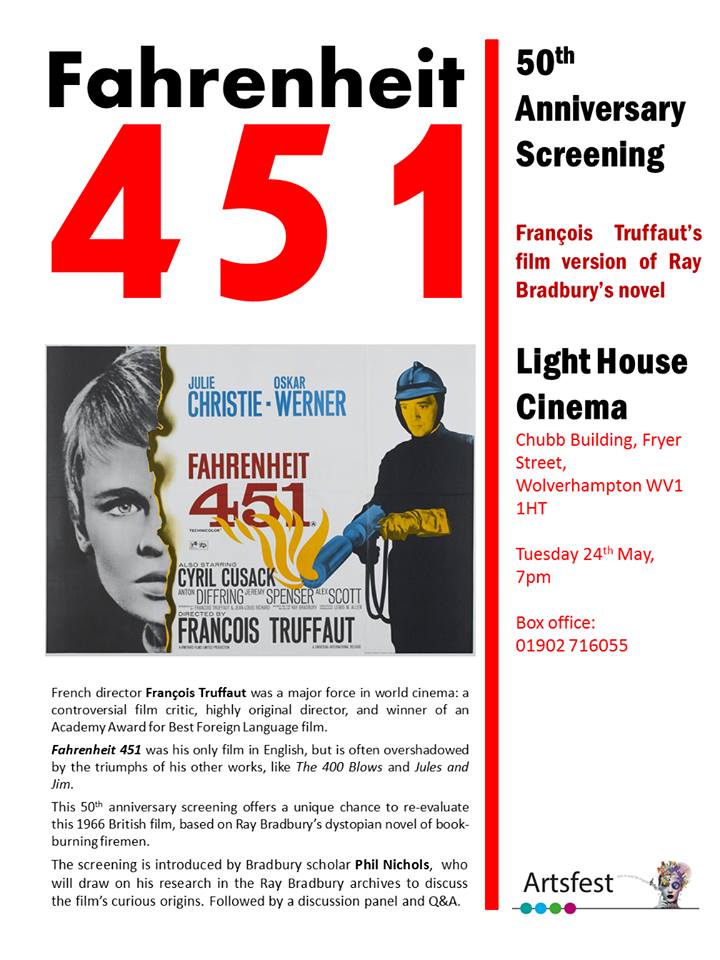 This unique film imagines a future world where books are banned, and shows one man’s journey from book-burning fireman to book-loving rebel. This British science fiction film was the only English-language work from prolific French director François Truffaut, and is one of the best adaptations of the work of American author Ray Bradbury. To celebrate the film’s 50th anniversary, Phil Nichols will introduce the film and reveal the findings of his research into its unusual origins. The screening will be followed by a discussion.

(2) BOOKS IN DEMAND. Richard Davies has the “Top Most Searched For Out-of-Print Books of 2015” at AbeBooks.

It’s never dull when we dive into BookFinder.com‘s dusty archives of digital data to compile a list of the most searched for out-of-print books from the previous year. Sex, religion, quilting, gardening, swimming, pike fishing, cooking and UFOs, you can find all the important aspects of life in this selection of literature.

(3) THE CURSED TUBE. “What Kurt Vonnegut and Ray Bradbury Thought About Television” at Mental Floss.

The May 1991 issue of The Cable Guide is chock-full of vital information, like time and channel listings for both Bloodfist II and the tape-delayed World Professional Squash Association Championship. Also included in this ephemeral TV encyclopedia are charming and prickly interviews with Kurt Vonnegut and Ray Bradbury. The visionary authors sat down to talk about—what else?—television.

The interviews are presented as dueling, short features, and they are published under the auspices of promoting the authors’ upcoming cable specials—Kurt Vonnegut’s Monkey House on Showtime and Ray Bradbury Theater on HBO. Even when doing PR work, they remained their true, sardonic selves.

“I’m sorry television exists,” Vonnegut told the interviewer. According to him, TV is “like a rotten teacher in high school, except it’s everybody’s teacher.”

With the help of the art teachers and 10th grade English teachers, the decision was made to work with acclaimed community muralist Richard Wyatt Jr. As the novel was being taught in classes, students had the unique opportunity to create a work of art that would honor an famous author, paint a scene from the novel while learning art concepts and techniques in genuine apprenticeship capacity.

The out of school community also played an integral part in the entire process.  With the support and funding of the the school’s Harrison Trust, ARC after school program and a dedicated alumni group, the project would not have been possible. They provided everything from art supplies, after school student supervision, and community outreach on a larger scale to making the students feel and know that there can always be a connection between art, literature and the greater Los Angeles community. The students were able to see that their work and dedication matter to the literary world as well as to other students in the school who may not have been interested otherwise.

As a teacher librarian, each step of this experience was a learning opportunity. The end product was bigger than I imagined. I thought collaborating and co-teaching different parts of the novel along with facilitating the Book Club meetings was good enough. I had not thought about reaching out to other members of the community. This project made the school library a more welcoming space to reluctant library users and a tourist attraction for Bradbury lovers.

Now the bar is set high as to what can happen in a library. The Bradbury library is now a place for students to access all of the resources they may need for their academic work, check out  and read books, work collaboratively with classmates but also admire a brilliant work of art. 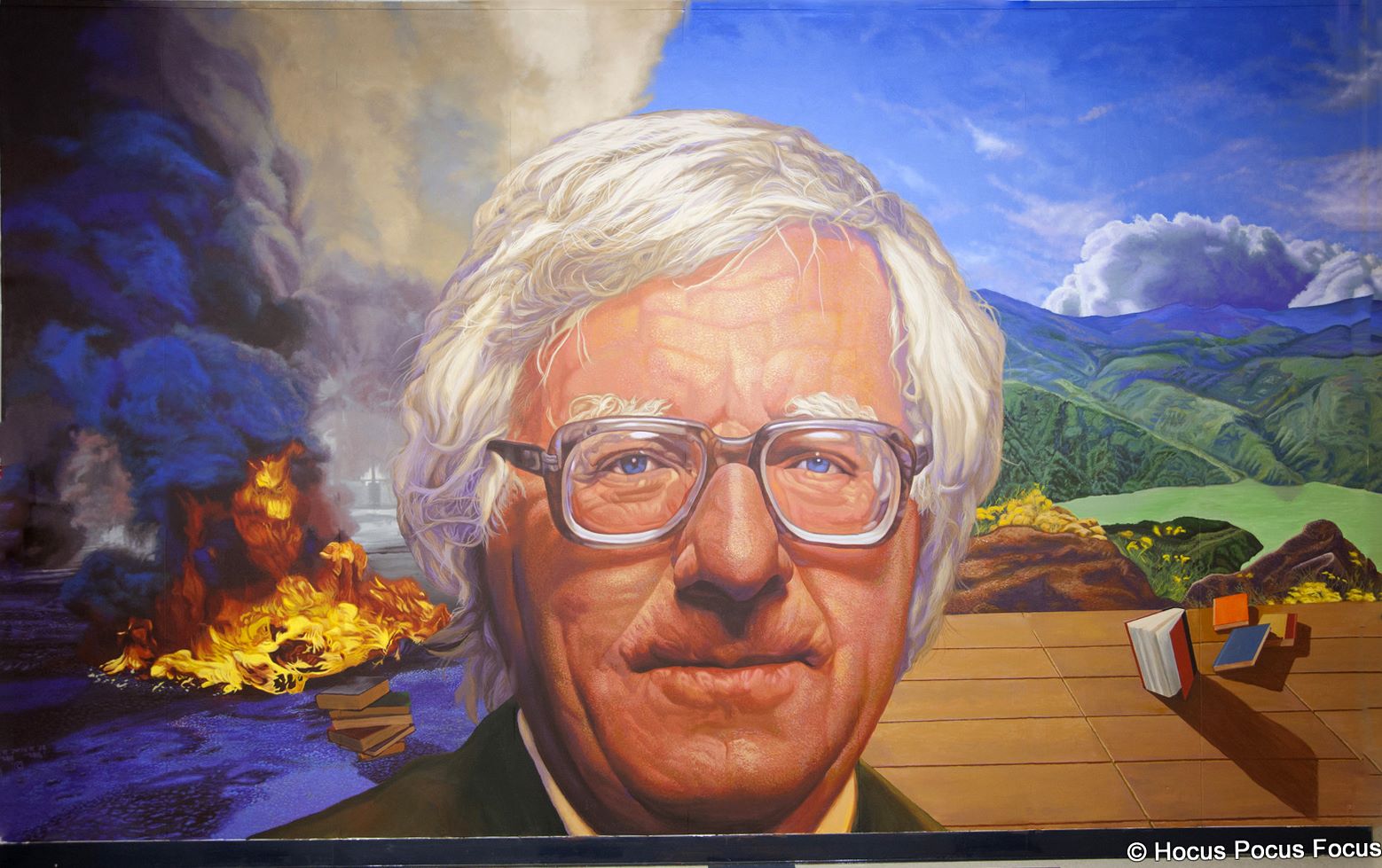 (5) ONLY YOU CAN PREVENT. The city of LA is using The Big Read for many things, like the draw for people to attend a presentation on the Essentials of Fire Fighting at a local library.

Safety first! Do you know what to do in case of a fire? Unlike the firefighters in Ray Bradbury’s make-believe world where fire was created on purpose (to destroy books), the Los Angeles Fire Department has teamed up with the Library to help you learn how to prevent fire danger and take precautions with everything from smoke detectors, candles, to outdoor grilling. Join us for this important and potentially life-saving presentation about safety and health, led by Sargent Stewart. For more information, please call 818.352.4481.

Ray Walters at geek.com explains why this book was influential on not just literature, but also science:

“The Martian Chronicles is a collection of loosely related fictional stories depicting humanities struggle to flee from the potential of nuclear war on Earth to try and find refuge on the Red Planet. Many of the ideas Bradbury put forth in the novels seemed fantastical at the time, but modern day efforts to explore Mars smack of the science fiction writer’s vision of what it would be like to visit there.

“While Bradbury is seen primarily as an author who had a profound effect on his literary genre, in reality his reach has been much wider. While his novels may not be required reading in our schools anymore (which blows my mind), his ideas are talked about everyday with the people uttering the words usually not knowing the origins of the topics they are discussing. Ray Bradbury will certainly be missed, not just for his amazing science fiction writing, but also for his visionary foresight into cultural phenomenons.”

NASA put a burned DVD containing The Martian Chronicles on the hull of the Phoenix Martian Rover.

3 thoughts on “The Bradbury Type”