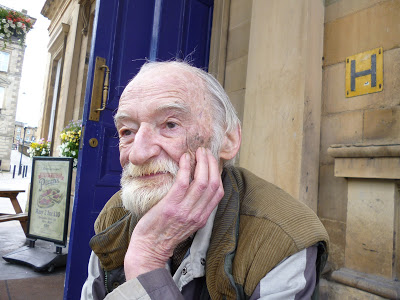 By John Hertz: A sneyd (also snead, sned, snathe) is the handle of a scythe.  The Science Fiction Poetry Association named Steve Sneyd a 2015 Grand Master of Fantastic Poetry. Marge Simon too, but Sneyd is a fanziner.

He was poetry editor for Langley Searles’ unsurpassed Fantasy Commentator.  His own Data Dump has been published a quarter-century; I reviewed it in Chunga (“Unfolding Stars”, Chunga 14). It’s mostly about poetry, preferably strange.  For a decade he ran a series of acronyms, printing five dozen of mine, e.g.

On the occasion of the Grand Master award, Andrew Darlington posted a 3,400-word piece “Steve Sneyd from Mars to Marsden” at Darlington’s Weblog Eight Miles Higher,  with photos, images of Sneyd’s various publications including Data Dump, electronic links, and things too fierce to mention; Darlington says “He’s been featured regularly, week-by-week, month-by-month, year-by-year since the 1960s in more strange, obscure, and esoteric journals than even he can possibly remember.” The piece is framed as an interview, but the poor interviewer found his subject “talks about everything…. everything — in fact, but Steve Sneyd himself.”  Earlier last year there was an interview in Amazing.

Sneyd himself elsewhere tells us

A Call to Mind is a Call to Action