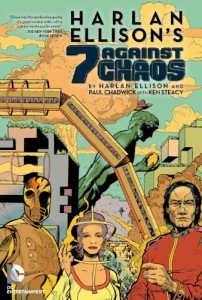 While it’s not the goal of this blog to be all-Ellison-all-the-time, I can’t deny that when it rains it pours.

StarTrek.com posted a two-part interview with Ellison this past week.

Part 1 delivers the history behind the new graphic story Seven Against Chaos by Harlan Ellison and Paul Chadwick with Ken Stacy.

Part 2 gets Ellison to talk about his classic Star Trek episode “City on the Edge of Forever.” Then he speaks quite candidly about health problems he suffered several years ago that convinced him he was dying, eventually diagnosed as depression and treated medically, and how he’s feeling now. Which is not too bad — Ellison has had 19 books come out in the last 11 months with more on the way.

STARTREK.COM: What else are you working on right now? And what’s left on your bucket lists for your life and your career?

ELLISON: I have no idea. I am not prescient. I cannot see what’s in the future. I have got dozens of unfinished stories sitting upstairs on my desk. I have books that are half-finished. I have memoirs that are three-quarters finished. There’s a huge bibliography of all of my work that’s coming out called Fingerprints on the Sky, which is edited by Tim Richmond. Four or five other people have worked on it for the last 17 and a half years. It picks up where Leslie Swigart’s bibliography leaves off and fills in all that stuff before and after. I sent off a new book a few days ago. It’s called Li’l Six Gun Harlan and His Sidekick Carl the Comet in Danger Land. It’s a chapbook about an anecdote that happened with me and Carl Sagan many years ago in South Philly. It’ll be published Subterranean Press early this coming year. It’s a small book, but larger than the book of my quotations, Bugf—k.