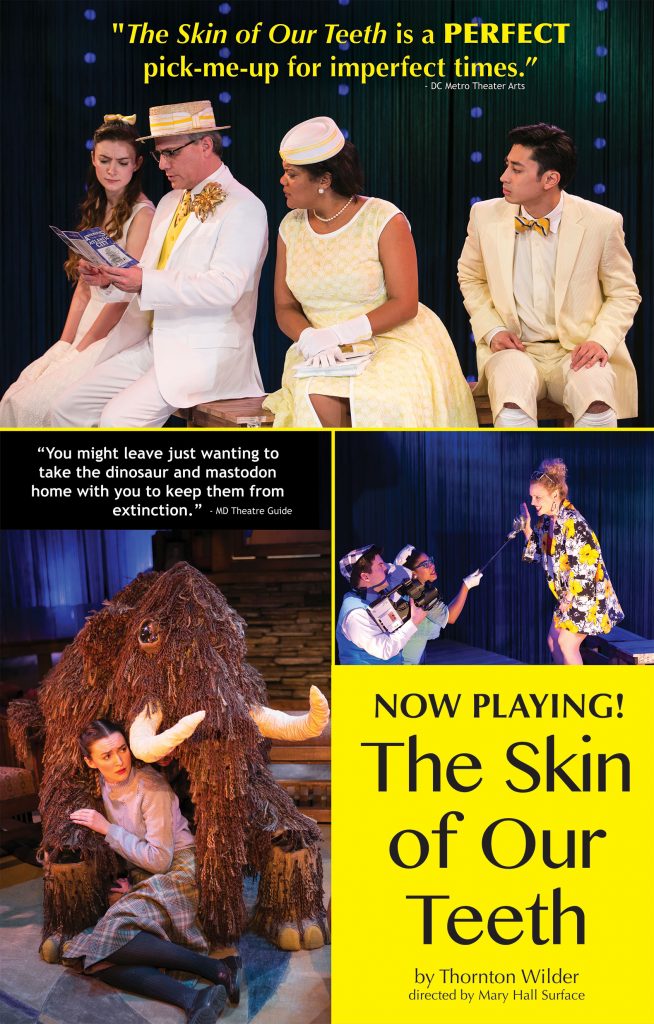 By Martin Morse Wooster: Name this play:  It’s probably one of the greatest fantasy plays ever written.  It’s one of the few outright fantasies to have won the Pulitzer Prize for Drama.  The likelihood you’ve seen this play is vanishingly small.

The answer is Thornton Wilder’s The Skin of Our Teeth, which won the Pulitzer in 1943.  As far as I can tell from IMDB, the last time anyone tried to film it was an Australian Broadcasting production in 1959.  But it’s a play that is undoubtedly fantasy.  It isn’t staged much, in part because plays from the 1940s don’t get revived very often, but more likely because the play has about 35 speaking parts, and few theaters these days can pay such a large cast.  However, it was revived on Broadway last year, and the Constellation Theatre Company has revived it with a cast of thirteen and a lot of doubling.  I was very happy to have seen it.

Wilder (1897-1975) wrote that he decided to write The Skin of Our Teeth in part as a reaction to the “well-made” plays of the previous generation. “Towards the end of the ‘twenties, I felt far less pleasure in going to the theater,” Wilder wrote in 1956.  “I ceased to believe in the stories I saw presented there.”  He said that in the plays he saw he couldn’t feel “overwhelmed by an artistic creation.”

So The Skin of Our Teeth has a lot of what used to be called “breaking the fourth wall” and we call “snark.”  There’s one seduction scene, for example, where the actress who is supposed to play it suddenly announces she can’t because it would upset a friend in the audience who has undergone trauma.  A second scene in the third act isn’t performed because we are told that seven members of the cast have all gotten ptomaine poisoning from bad lemon meringue pie.

I thought these were ironic commentaries by today’s theatres on an antique text, but I dutifully read the script and these interruptions are in it.  In fact, I thought Mary Hall Surface’s direction was reasonably straightforward with minimal updating, although of course The Skin of Our Teeth is now a historical play set in the 1940s.

It’s also, like T.H. White’s The Once and Future King, very much an apocalyptic fantasy that is the product of when it was written—just before World War II.  Wilder said The Skin of Our Teeth “was written on the eve of our entrance into the war and under strong emotion and I think it mostly comes alive under conditions of crisis.”  He added that he was moved seeing productions in Germany in the late 1940s, “in the shattered churches and beerhalls that were serving as theaters,” where people would choose to skip meals to buy theatre tickets.

As for the plot:  We begin in the comfy home of Mr. and Mrs. Antrobus at 216 Cedar Street, Excelsior, New Jersey.  It seems like we’re in one of those dramas where characters take the 5:56 to Chappaqua every evening except that the Antrobus family is really five thousand years old, and a giant ice sheet is coming down from Canada.  Oh, and the refugees pounding their door asking for food are really Moses, the Muses, and other mythical characters.  And the Antrobus’s have a mammoth they milk and a pet dinosaur named Frederick.

It turns out there are more environmental disasters in this play than in three Kim Stanley Robinson novels.  The second act has the characters in Atlantic City, where Mr. Antrobus is about to win an award for being a superior human.  But then he has to face a titanic flood.  The third act has the Antrobuses surviving a major war in the U.S. that pits Mr. Antrobus’s son (who could be the Biblical Cain) against his father.

I’m not sure that this play works today.  It’s a different flavor than the sort of plays I enjoy.  But I respect Wilder’s intelligence and imagination, and I was very glad to have seen this play.  The Skin of Our Teeth is a classic that fantasy lovers need to have seen.

I thought the cast was fine, with Steven Carpenter as Mr. Antrobus and Tonya Beckman as Sabina giving the best performances.  But the standout to me were the costumes of Frank Labovitz, who both provided some ridiculous dresses for Atlantic City patrons and also created the dinosaur and mammoth costumes.  The mammoth looked like a walking throw rug, and was charming.

19 thoughts on “The Skin of Our Teeth: A Review”