My esteemed compatriots and I desperately need your help.

We have a problem that requires your input.

All alone in the dark — maybe lost in the woods, or trapped in an abandoned mineshaft — you hear a noise, turn, and find one of these five creatures facing you: 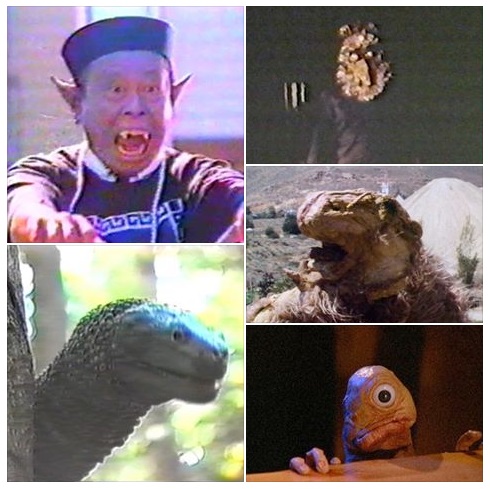 Which one would you laugh hardest at?

Only you can tell us: Which is the Stupidest-Looking Monster?

B-movies need love and recognition, too. That’s why we’re here. The Smithee Awards are like a People’s Choice Awards for bad movies, but live and in real-time.  We watch sub-par cinema from all eras and many nations, then we show you clips in 19 different categories, starting with Most Ludicrous Premise, winding our way through Worst Science and Acting Appropriately Stupid, finally ending at Worst Picture.  We show five clips per category, and the audience votes on which clip “wins.”

After five years of “winners,” we have enough clips to do a Contest-of-Champions-style show, where these “winners” compete against one another.  We call those Mega-Meta Smithee Awards.

We are now at the point where we have five Mega-Meta Smithee Awards in the books, and have put together a show pitting the “winners” of those Mega-Meta shows against one another:  Ye Ultra Mega-Meta Smithee Awards, capturing 25 years of B-movie curation.  This is the show which will be happening on October 21, 2017, in Ann Arbor, Michigan, and again in June 2018, in Columbus, Ohio.

To say that I am excited about this is an understatement.

It all started with It Came From the Late, Late, Late Show.   In this game, the players role-play actors who are playing characters in a bad movie.  One of the suggestions for getting players (and the Director, who runs the game) into the mood is the “Late Show Cast Party,” for getting together and watching these bad movies.

At one of these Cast Parties, during a movie called The Alchemist (1983) (which contains no alchemist), one of the characters slips on some broken glass and falls onto a fireplace poker, conveniently impaling herself.  “There should be an awards show for movies like this,” someone said out loud.

Twenty categories were quickly brainstormed, “Worst Music” discarded, and that was the fateful genesis of The Smithee Awards.  Of course, The Alchemist by itself doesn’t make an awards show, and so more movies were watched.

The first Smithee Awards show was in Ann Arbor in 1992.  It was a fancy, one-off affair.  Until the next year, when it wasn’t.

At the third Smithee Awards show, in 1994, some representatives from Stellar Games (publisher of It Came From the Late, Late, Late Show) came up from Toledo to see what we had wrought.  One of them was the President of the Game Manufacturers Association, which puts on the Origins Game Fair.  He invited us to Origins the following year.

The fourth Smithee Awards show was in Ann Arbor in 1995 — and in Philadelphia at Origins.  The year after, Origins moved to Columbus, Ohio, and has been there ever since.  And so have The Smithee Awards.

There are four members of the Smithee Supreme Committee (aka the Smith-ka-teers).  By year six, only two remained in the Ann Arbor area.  In 2005, the two remaining Ann Arborites decided that we wanted to hone our Smithee ballots and started showing a Smithee Awards Primary at our local gaming convention (U-Con).  It differs from a proper Smithee Awards primarily in format.  There are generally between 3 and 10 clips per category, and we ask the audience to vote for their top two.

In 2007, we started showing The Smithee Awards at Smith College’s ConBust in Northampton, Massachusetts.  A friend who had moved away was teaching at Smith, and one of her students was the President of the Con that year.  Ever since, we have shown Smithees to Smithies.

In 2008, we accidentally expanded our showings by making inquiries at a local sci-fi / unix / miscellaneous geek convention (Penguicon).  We said, “How does one propose an event for Penguicon?” and the event coordinator said “I know you guys.  You’re on the schedule,” and we said, “Thanks.” And that is how we backed into Penguicon 2009.

At this point, we do four point five Smithee Awards shows a year (counting the Primaries as half a show).  Mega-Meta years up this number to six point five, since we run the special shows in Ann Arbor (the longest-running show) and in Columbus (the show which all four Smith-ka-teers attend).

Like a sporting event, there are certain chants you may hear at a Smithee Awards.  When there is an onscreen explosion (anywhere from a station wagon falling off a cliff to a large mushroom cloud from a nuclear reactor), the crowd will often chant “U! S! A!  U! S! A!  U! S! A!” At quieter moments, or when an affirmative response is called for, the chant is “Praise the Ray!” (from Shredder Orpheus (1990)).  And always, multiple times a show, there is the call and response which began with Guns of El Chupacabra (1987):  “Chupa!”  “Cabra!”

Over a decade ago, we started making buttons and puppets to give away.  The puppets are based on Stupid-Looking Monsters, and the buttons span a wide range of topics (ninjas, monsters, quotes from films gone by).  Fans appear bedecked in buttons of years past, and bring their puppets back year after year. 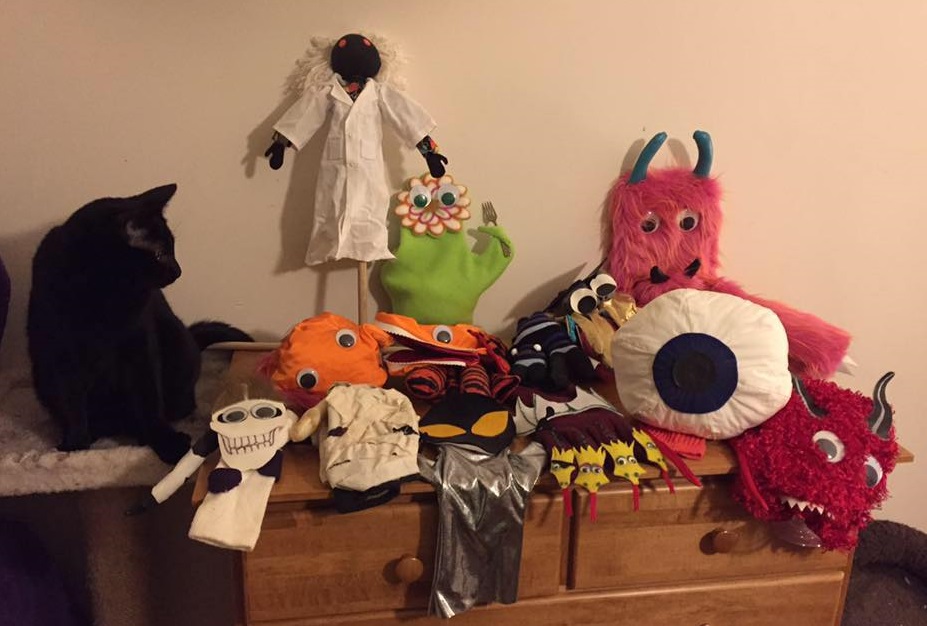 This picture shows an example of every Smithee puppet, except one (invisi-lizard not pictured).

We have given away two physical awards to stars of Smithee Award films in the past twenty-six years.  They were sculpted into trash cans out of floral foam bricks, then lacquered, painted gold, and hot-glued to a film can.

The first one went to Walter Koenig for Moontrap (1989) (which won the very first Worst Cover Copy Smithee). Lest you forget that Walter Koenig, of Star Trek fame, was in Moontrap, the cover helpfully took any and all opportunities to remind you. In loving detail. On both sides. The back cover was essentially a Walter Koenig filmography.  Walter’s response was an instant Smithee Classic Memory:  “But I don’t want it.”

Jeff Conaway (A Time to Die (1991)), on the other hand, was so enamored of the idea that he agreed to appear onstage at The Smithee Awards show in Columbus in 1999.  He talked to the audience about why bad movies get made, told some stories, and accepted his golden trash can.  A minute after he walked out of the room, he stuck his head back in, clearly pleased with the quality of the award. “It already broke!”

In 2006, the Worst Picture winner was Guns of El Chupacabra, and it became an instant audience favorite.  There were a lot of scenes where people stood on-camera (occasionally naked) and fired guns at unseen monsters offscreen.  It turns out that in California, you need a permit to shoot blanks for a movie.  So they used live ammunition instead.  The director Scott Shaw (the actor and martial artist, as opposed to Scott Shaw! the writer and comic book artist), e-mailed us out of nowhere, saying he had seen on the Internet that we gave one of his movies some kind of award.  So we responded, “Yes, we did,” and waited to see what would happen.  Did we mention that he was a martial artist first, before he became an actor and a director?

It turns out that he sells his movies directly through his website, and after seeing our show, enough people ordered copies that he got curious and tracked us down. He sent us a promotional video to play at the next year’s Smithee Awards — and another four movies to watch for future years.

What kind of movies “qualify” for The Smithee Awards?  We have a few broad guidelines.  We like movies to be commercially available (so that the audience can track them down if so inclined).  We like movies to be of professional quality (and the details on that have changed vastly in the past 25 years).  We do not go after big budget movies (they are acknowledged by their own set of awards).  We only do movies which are in English (or Esperanto).  We don’t do bad comedies (because the hallmark of a bad comedy is that it isn’t funny).  We prefer not to show already-acknowledged bad movies (e.g. Plan 9 From Outer Space (1959)).  When a movie is right on the line, we look at its overall tone.  A few outlier scenes won’t disqualify an otherwise-acceptable movie.

Here are a few of my favorite examples which do not appear in Ye Ultra Mega-Meta 1.

The Lift (1983) is a movie about an elevator which is upgraded with some special computer chips which cause it to gain sentience and start killing people.  It’s a Dutch film, and for some reason, when it was dubbed into English, they did not dub the word “chip.” So every piece of dialogue that references these computer chips is spoken by the original actor.  It lead to decades of dropping our voices an octave when ordering salsa and chips.

Amsterdamned (1988) is my other favorite Dutch movie.  A killer is stalking the canals of Amsterdam, and our intrepid police detective is just the man to catch him.  It features a wonderful speedboat chase sequence through the canals where we play “Count the chase scene clichés” (through a marching band, through an outdoor cafe, etc) and get into the double digits.

Shock Waves (1977) (with Peter Cushing and John Carradine) is a movie that features Underwater Solar-Powered Nazi Zombies.  This features the classic scene where Obnoxious Sailor #2 is running from a strange noise in the woods on this tropical island.  He runs out of the woods and into the water, where he steps on a spiny sea urchin and dies.

Zombie Lake (1981) is a movie that was shown locally on Sir Graves Ghastly’s show on TV2 in Detroit.  I did not grow up in Michigan, but multiple people recommended it to me.  When we tracked it down to watch it, we were stunned.  It is a French zombie movie, and there is a lot of nudity.  The woman at the beginning of the film who takes down the No Swimming sign?  Skinny dipping.  The women’s volleyball team who stops for a little swim?  Skinny dipping.  There were at least three different random skinny dipping scenes.  It made a little more sense when we realized the only bonus features on the DVD were the “alternate clothed sequences” shot for American television.  All of the underwater scenes are clearly shot in a swimming pool.  There is also a good-Nazi-zombie-versus-bad-Nazi-zombie knife fight.

U-Con’s snack table has the highest variability.  Some years there is a lot of food donation, and other years it’s two bags of off-brand chocolate cookies and a two-liter bottle of carbonated kvass (with raisins).

Penguicon has a small snack table (as the con has a well-stocked Con Suite), and usually consists of weird things that I can’t buy in large quantities.  Our #1 homemade item here is peep sushi 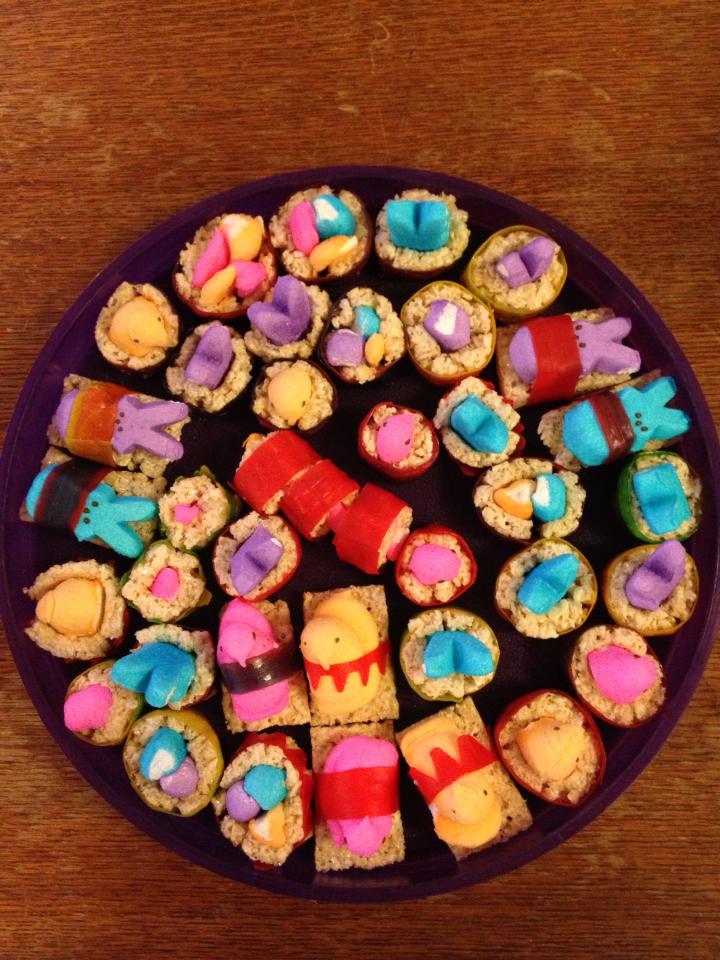 Peep sushi is available as rolls or nigiri.

Columbus has no snack table, since Origins Game Fair has a very strict No Outside Food policy.

Each show takes four to five hours from start to finish, although we encourage people to float in and out if they don’t have the stamina (or the time) for the whole thing at one go.  Our regular shows run typically in November (Smithee Primary), March (ConBust), April (Ann Arbor), April/May (Penguicon), and June (Origins).  The special Mega-Meta shows run during the fall in Ann Arbor and we double up at Origins.

We have exposed audiences to clips from over 1000 movies in twenty-six years (and are always open to movie suggestions), met the strangest people and befriended them, eaten a lot of junk food, and even microwaved several packages of Mr Corkers (a combination microwave-popcorn-and-pork-rinds product from the late 1990s).  In all that time one thought has driven us through the late-night movie marathons, the Type II diabetes, and all the other necessary prep work: “I stayed up to watch the end of THIS?!”

7 thoughts on “The Smithee Awards”