“Gandalf on Titan” may sound like the title of an Ace Double but as of today it’s a map feature on Saturn’s largest moon.

The IAU Working Group for Planetary System Nomenclature has just announced that Titan has Mountains of Moria and Gandalf Hills.

Some of these hills are called by the Latin word colles. 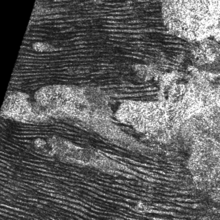 [Thanks to Bill Higgins for this story.]