Taral must be wondering where the Ray Bradbury coverage has gone. Fortunately John King Tarpinian has furnished some more reports about Ray Bradbury Week in Los Angeles.

On August 26 there was a screening of Wonderful Ice Cream Suit (photos here).

John King Tarpinian writes: “One of Joe Mantegna’s first paying acting jobs was for Chicago’s Organic Theatre Company’s production of Ice Cream Suit…which was F. Murray Abraham’s first paying acting gig as the tailor. Stuart Gordon, best known for the cult classic, Re-Animator, and Joe entertained the audience about stories about filming the movie. They said that when Sid Caesar was on the set filming each take was different and funnier than the one before…the crew was laughing so hard that they were the ones ruining the shot.”

Earlier in the week, on August 24, the Playboy Foundation presented a screening of Fahrenheit 451 starring Julie Christie, Oskar Werner and Cyril Cusack. The film was preceded by a discussion with Ray Bradbury and Hugh Hefner moderated by Los Angeles Times reporter and Hero Complex blogger Geoff Boucher.

Tarpinian was there: “Among the things said by Hef was how grateful he was to have met Ray at the right time in both their lives. How Ray introduced him to Charles Beaumont which resulted in The Crooked Man being the first piece of fiction published in Playboy.” 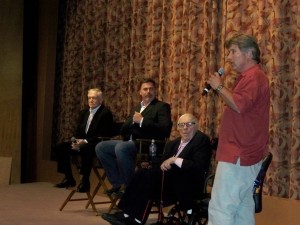 On stage: Hef, Geoff Boucher of LA Times, Ray and Richard Stayton of Written By magazine.