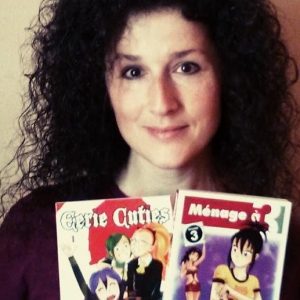 Gisele Lagace, a Canadian webcomic artist who also has worked on Archie, Betty Boop and Jem and the Holograms comics, told Facebook readers she was turned back from the U.S. border on her way to appear in Artists Alley at C2E2, a ReedPOP show being held at McCormick Place in Chicago this weekend.

They kept pressing about the comics I had and the sketches, and well, I had to be honest and said that I did get paid for commissions but before hand, but since they weren’t complete, it was considered work in the us. Comics wise, I had maybe $700 in value if I had sold everything. Honestly, it’s not a lot.

Was asked if I was the only one doing this as I looked surprised to be refused entry. I said no, many artists from around the world attend these to promote themselves. I don’t think they cared.

Lagace’s person and car were searched:

My car was searched and is a mess. And to top it off, I was body searched and finger printed too (they do that when you get refused entry apparently.) It was an awful experience.

Things then went worse when they searched me throughout and found 2 white pills in my wallet. There was no identification on them and I wasn’t sure what they were. Once I calmed down after being touched all over, I remembered they were generic acetaminophen from the dollar store that I carry around in case Marc gets a headache as it sometimes happen. I forgot they were even in there.

Anyway, I wasn’t turned around for the 2 acetaminophen, as they found those after I was refused entry for the comics in my car and the unfinished sketches but they kept us longer there until they were convinced they weren’t narcotics. I never took drugs in my life!

Lagace, whose Twitter page says she’s from New Brunswick, wrote that she and another person has driven two days to reach the Windsor border crossing.

And she’s concerned that she now has a record of being refused entry to the U.S.

Don’t expect to see me at a US con until I can figure out a way to get in and being absolutely certain this won’t happen.

People are outraged on her behalf — 20 hours after being posted on Facebook her story has 561 shares.

On the other hand, work visa laws have been in effect for a very long time, in the U.S. and many other countries. Lagace’s truthfulness that she was likely going to work despite attempting to enter as a visitor is admirable but unless a person is prepared to tell a lie in that situation the guards will enforce the law.

This news story has reminded people of Peter Watts’ far worse experience at the US/Canadian border in 2009 when he ended up being arrested after a physical altercation during a search of his car.