The U.S. Postal Service today announced additions to the 2022 stamp program, including a stamp that celebrates the James Webb Space Telescope, and a sheet of stamps of various Peanuts characters to commemorate the centennial of Charles M. Schulz’ birth.

Shown below are preliminary designs. Issue dates and locations will be announced later. 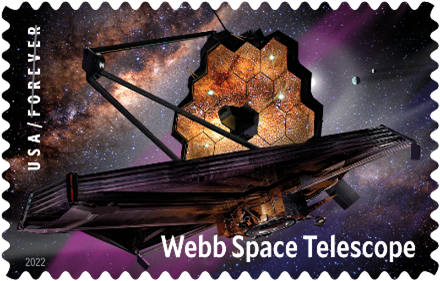 Celebrate NASA’s remarkable James Webb Space Telescope, the largest and most complex telescope ever deployed in space—capable of peering directly into the early cosmos and studying every phase of cosmic history. Launched on Dec. 25, 2021, Webb now orbits the Sun about a million miles away from Earth.

The image on the stamp is an artist’s digitally created depiction of the telescope against a dazzling starscape. The selvage photograph of a star and distant space was taken by Webb early in its mission, brilliantly confirming the perfect alignment of the telescope’s 18 mirror segments. 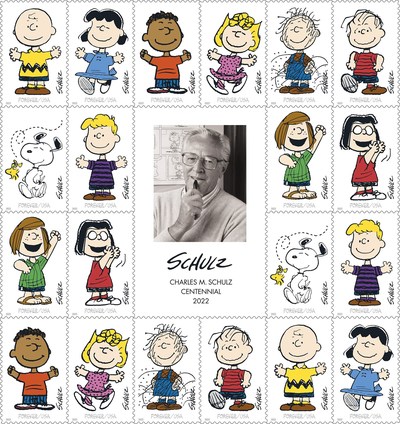 New stamps salute the centennial of cartoonist Charles M. Schulz (1922–2000) whose “Peanuts” characters are some of the best known and most beloved in all of American culture. For five decades, Schulz alone wrote and drew nearly 18,000 strips, the last one published the day after he died. Each character reflects Schulz’s rich imagination and great humanity. His resonant stories found humor in life’s painful realities including rejection, insecurity and unrequited love.

In a celebratory mode, characters from “Peanuts” adorn 10 designs on this pane of 20 stamps and form a frame around a 1987 photograph of Schulz.

4 thoughts on “USPS Will Feature Webb Telescope, Peanuts on Stamps for 2022”