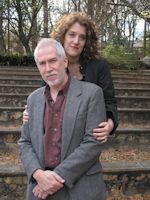 The NYRSF Readings on October 4 will feature three experts on the subject of vampires, Clay and Susan Griffith, and Margot Adler.

Clay and Susan Griffith are a married couple who have produced two novels in their latest series, Vampire Empire. The first, The Greyfriar, released by Pyr Books to critical acclaim, now has been followed by The Rift Walker.

Margot Adler is a journalist and correspondent for National Public Radio. She wrote a piece for their website about the experience of reading 75 vampire novels (she’s now up to 184). Margot is the author of Drawing Down the Moon and Heretic’s Heart. Her grandfather, Alfred Adler, is the father of individual psychology.

The NYRSF Readings take place at The SoHo Gallery for Digital Art, 138 Sullivan Street, New York and begin at 7 p.m.

Tuesday, October 4 — Doors open 6:30 PM
$7 suggested donation
The SoHo Gallery for Digital Art
(address and links below)This month we feature a close look at those fascinating blood-suckers — vampires. (You thought we were talking about investment bankers, didn’t you?) For this supernatural excursion, we bring you three experts on the subject: Margot Adler of National Public Radio, and Clay Griffith and Susan Griffith who have fashioned the steampunk Vampire Empire.

—
Clay and Susan Griffith are a married couple who have written and published together for more than a decade.  Their most recent series, Vampire Empire, has had steampunk and vampire fans ecstatic with its genre-blending adventure.  The first book, The Greyfriar, was released by Pyr Books to critical acclaim, and we expect no less from the recently released new novel, The Rift Walker.

Their credits include three books for Bantam Doubleday Dell in the mid-1990s, and another for Pinnacle Entertainment in 2002, along with numerous short stories published in many anthologies.  They’ve also written scripts for television and published graphic novels.  Visit them online at http://clayandsusangriffith.blogspot.com

Margot Adler is probably best known for her work as a journalist and correspondent for National Public Radio. A Clarion workshop graduate, she recently became fascinated with the world and subculture of vampire fiction.  She has read (as of this writing) 184 such books over the last couple of years, and has lectured and broadcast on the topic.  (The list of her first 75 is at http://www.npr.org/templates/story/story.php?storyId=123115545 )

Adler began her radio career at WBAI in the late Sixties. She started her daily live radio program, Hour of the Wolf, in 1972 and followed that with the program Unstuck in Time.  She joined NPR in 1979 as a general assignment reporter covering NYC, and is a regular voice onMorning Edition and All Things Considered.  Since 9/11, she has focused much of her work on stories exploring the human factors of New York City, from the loss of loved ones, homes and jobs to work in the relief effort.  She hosted the radio show Justice Talking until the show’s funding expired in 2008.

Margot is the author of Drawing Down the Moon, considered a watershed in American NeoPagan circles, and Heretic’s Heart.  Her grandfather, Alfred Adler, is the father of individual psychology.

—
The New York Review of Science Fiction Reading Series provides performances from some of the best writers in science fiction, fantasy, speculative fiction, etc. The series usually takes place the first Tuesday of every month, but maintains flexibility in time and place, so be sure to stay in touch through the mailing list and the Web.

—
Jim Freund is Producer and Executive Curator of The New York Review of Science Fiction Readings. He has been involved in producing radio programs of and about literary sf/f since 1967. His long-running live radio program, Hour of the Wolf (created by Margot Adler,) broadcasts and streams every Wednesday night/Thursday morning from 1:30-3:00 AM.  Programs are available by stream for 2 weeks after broadcast.  (Check http://hourwolf.com or follow @JimFreund for details.)

The SoHo Gallery for Digital Art (www.sohodigart.com)  is dedicated to re-establishing SoHo as an international center for the development of new artistic forms, concepts and ideas.  A screens-instead-of-canvases approach allows a wide selection of art from around the world which would otherwise never make it to the City.  The SGDA is available for private gatherings and events of all kinds.  For bookings call (800) 420-5590 or visithttp ://sohogallerynyc.com.

WHERE:
The SoHo Gallery for Digital Art
138 Sullivan Street  (between Houston & Prince St.)

HOW:
By Subway
6, C, E to Spring St.; A, B D or F to West 4th; 1 train to Houston St; or R, W to Prince St.There are many convenient bus lines that come within a couple of blocks of the gallery.  Use the link above for an interactive transit map.