Let’s see, if we can,
Xanadu on other worlds,
Xenogamously.

I wasn’t sure I could manage a 5-7-5-syllable acrostic about Westercon LXX.  You may think I didn’t.

Anyway I meant Coleridge’s wonderful poem (not particularly how he may have come to imagine it, nor the Raymond F. Jones story “Person from Porlock”, about the fellow who interrupted him, nor the strange Sturgeon story – “strange Sturgeon story” may be redundant).  “Xenogamy” – cross-fertilization – is from a conversation I had with Kevin Standlee a few years ago about what general-interest cons, like Westercon, are good for.

There are lots of special-interest cons these days.  At a general-interest con you meet people you didn’t know you wanted to meet.

When the chair of next year’s Westercon took the gavel during Closing Ceremonies she quoted that, gosh.

But we trespass upon chronology.

Westercon LXX “Conalope” was 1-4 July 2017 at the Mission Palms Hotel, Tempe, Arizona, combined with local Leprecon XLIII.  Attendance about 600; Art Show sales $5,100 by 31 artists.  The Hospitality Suite had a stuffed-toy jackalope; the newsletter was The Jackalopian.  It being the 70th-anniversary month of something or other in Roswell, New Mexico, just 400 miles away, slant-eyed oval heads were all over.

On the cover of the Program Book was my favorite Dillon piece in the Art Show, Skyward Bound, a muscular black man in a knee-length tunic, golden wings strapped to his arms, poised to fly from a cornice in the clouds. 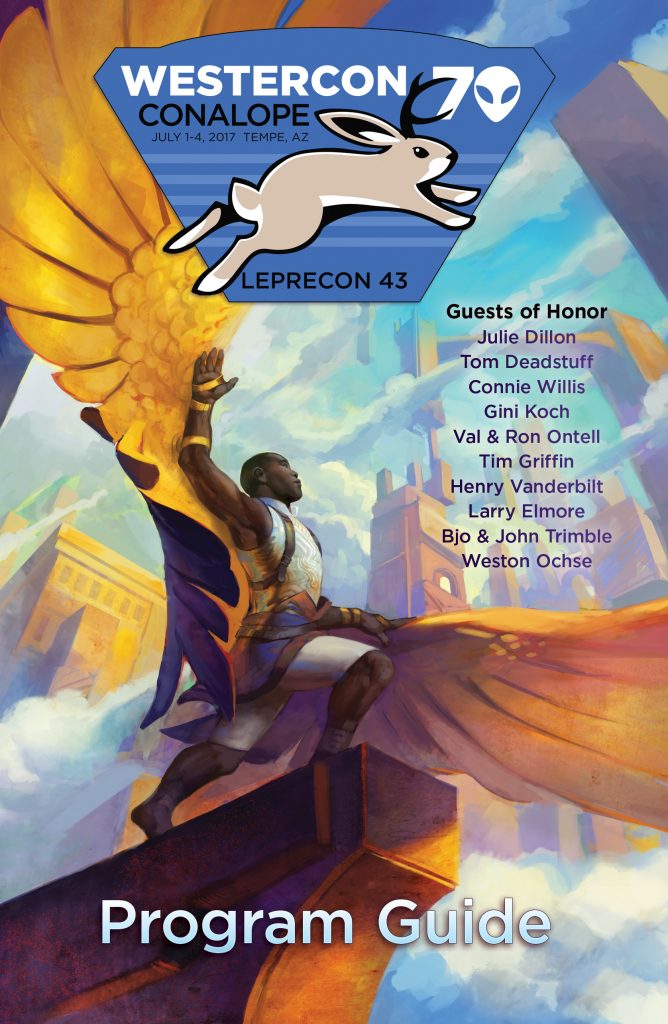 When I say the con was hot I mean it was lively, engaging, fun.  You probably know it was also 110F.  Even in the noonday sun I saw folks basking happily outdoors.  I asked.  They liked it.  There’s diversity for you.

Sarah Clemens leading her Art Show tour said “I couldn’t think of anything more incongruous for dragons to do than pressing flowers.  They’re terrible at it.”  That’s how she painted them.  Also “I like art’s having some ambiguity.  It gives people room to play.”

Regency Dancing had its usual salad bowl (so these must be my salad days) of people in modern clothes, period costume, fantasy and science fiction.  The last four words also describe my adventures teaching folks all over the spectrum from knowing nothing to lots.  I wouldn’t miss it for the world.

The Utah for 2019 Westercon party had Italian sodas.  Also mead from Hive Winery in Layton, where they’ll hold the con (they won).

At the WesternSFA party Craig Dyer gave a cordial reception.  He’d started distilling the best from life in 1988; he was well along by Westercon LVII when I was his Fan Guest of Honor (and where I saw Clemens’ superb “Stigmata”). 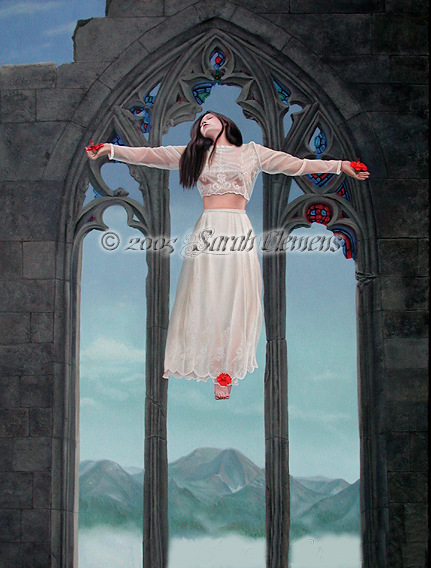 Hal Astell the Vice-Chair of LXX told me how well the multitudinous local groups were co-operating.

First Classics of S-F discussion, The Sword of Rhiannon (Leigh Brackett, 1949).  Rich McAllister said, a planetary romance head and shoulders above the rest.  Lin McAllister said it was like The Sea Hawk (M. Curtiz dir. 1940).  I said, look how naturally everything that has to happen, does happen.  Also we see not only “I’ll give them the technology, punish me for it” but why it might have been forbidden. 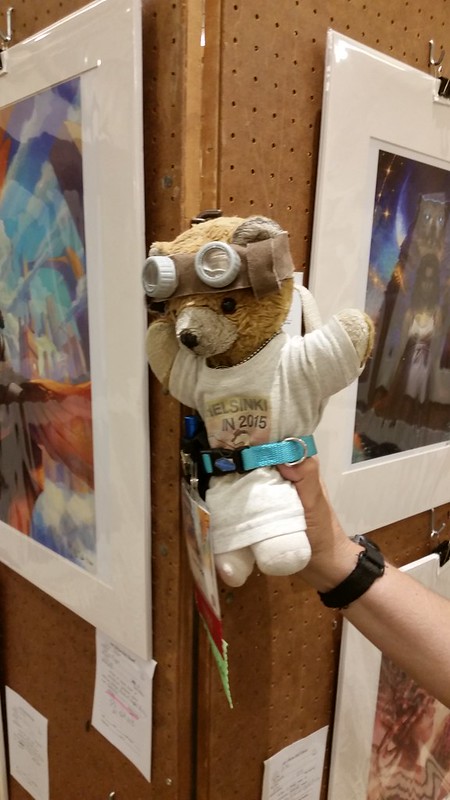 Art Show chief Annette Sexton-Ruiz taught me about mono silkscreens.  She said half the Show came from mail-ins.  I think it’s vital people can participate from a distance.  Kuma Bear’s tour had, as Lisa Hayes admitted, a simple but limited perspective.  Bears don’t like dogs; dogs fight bears.  Cats steal fish.  Kuma liked Tabitha Ladin’s “Blackberry Bounce” and the Steampunk (with railroad trains!) of an artist identified only as Voit. 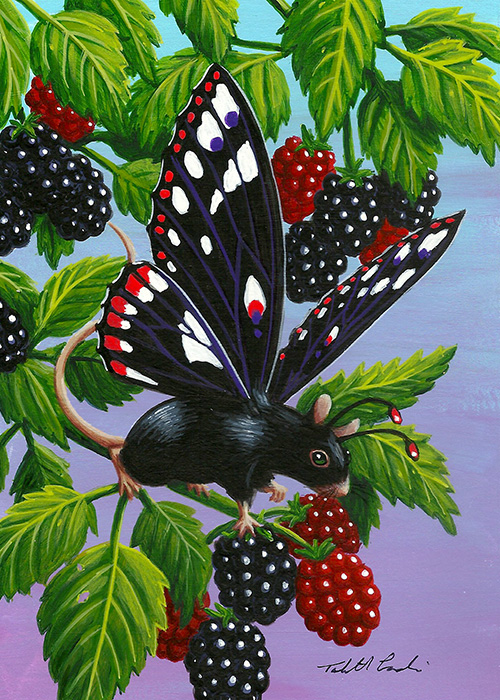 I was Chief Hall-Costume Judge; hall costumes, the term we evolved years ago, are the fantasy and science fiction clothes some people wear for strolling the halls.  Marjii Ellers used to call them daily wear from alternative worlds.  Helping me were Elaine Mami, Sandy Manning, Bjo Trimble.  Jim Manning brought me a cookie from Alaska.

On Sunday afternoon I went to “Accurate Science in Science Fiction”.  As usual, the part after the colon was the real title.  Before the colon was “It Doesn’t Work That Way”, which might have been – I’ll let you do it.  Ron Ontell offered the best remark, “I’m only annoyed when after setting out to do science they get it wrong.” 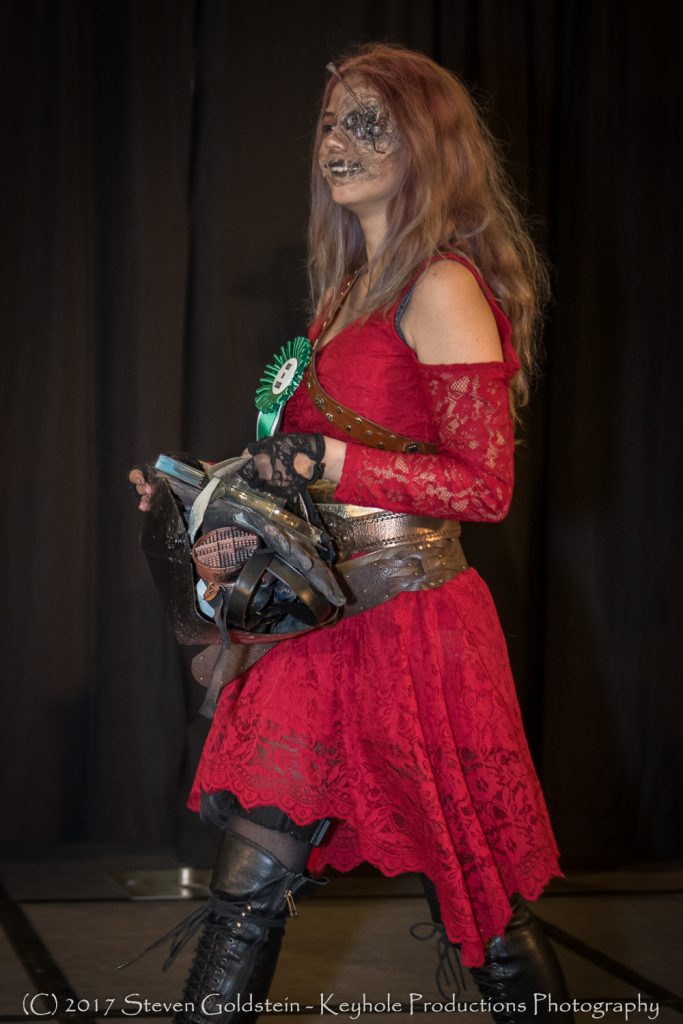 Monday, The Lights In the Sky Are Stars (Fredric Brown, 1953).  Ben Yalow had stopped me in the hotel lobby to say kind things about this set of three.  Stars may be Brown’s only straightforward SF.  And what a wallop!  Bill Green said the protagonist, Max Andrews, was a villain.  Or was he a tragic figure?

At the Star Trek 50th-anniversary party I was neither first nor last to tell the Trimbles “You’re responsible for this.”  John said it was the greatest case of Who knew?  At the Westercon LXXI party (Denver, Colorado) – I think – Rick Moen tried to explain the Norwegian languages Bokmål (in case your software doesn’t show it, that’s a volle, an a with a tiny ring over it) and Nynorsk.

In the Hospitality Suite, talk of Justinian II led me into conversation with Paul Honsinger, whom I hadn’t known I wanted to meet.  Filking; I heard “Water’s been found on the Moon” and the Monster’s Lullaby.

For “How Do We Get to the Stars?” Steve Howe brought a chart of energy against distance.  He dared to mention the Orion pulsed-fission model.  A drive using antimatter is conceivable; he’s written about it. Unless I was asleep – always possible – we didn’t get to ramscoops.  You don’t carry much fuel, but what if you arrive somewhere thin of interstellar dust?

The Dead Dog Party (until the last dog is – ) was fine for fireworks.  I recited a poem to Leslie Fish.  Sandra Childress, currently of Tucson – as Woody Bernardi said he was – had been coaching archery.  The hotel lobby had a ten-foot color-photo display from the Arizona State University School of Earth & Space Exploration (gosh) with Ceres, Vesta, Jupiter’s and Saturn’s moons, and the Cassini, Dawn, Galileo, and New Horizons missions.  And so to bed.