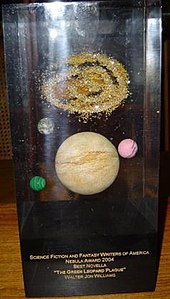 By JJ: The Nebula Finalists have just been announced, and if you’d like to check them out to see whether you think they’d be good contenders for your Hugo ballot, you can use this handy guide to find material which is available for free online.

Where available in their entirety, works are linked (most of the Novelettes and Short Stories are free). If not available for free, an Amazon link is provided. If a free excerpt is available online, it has been linked. (In some cases, you may need to scroll down the linked page and/or click on an “Excerpt” link to see the excerpt.)