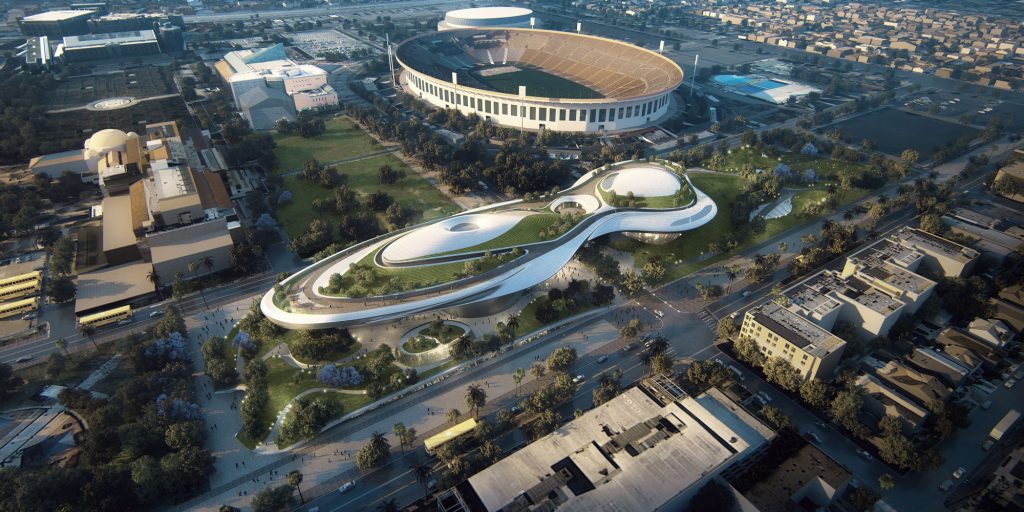 The Lucas Museum as it would look in Los Angeles’ Exposition Park.

To speed prospects of getting his Lucas Museum of Narrative Art built somewhere, George Lucas has released architect’s drawings of the building as it would look in Los Angeles, beside the Coliseum in Exposition Park, and in San Francisco, on Treasure Island. Each location has the support of its city’s mayor—Eric Garcetti in LA and Ed Lee in San Francisco. The museums have been designed by Chinese architect Ma Yansong (MAD Architects) — and both look like space ships.

In June, Lucas abandoned efforts to build the museum in Chicago, unwilling to engage in time-consuming litigation with Friends of Parks to use the lakefront location approved by local government. That was Lucas’ second defeat, having turned to Chicago after his original proposal to build on the grounds of the Presidio failed to gain acceptance in San Francisco.

The Los Angeles version of Lucas’ museum would include: 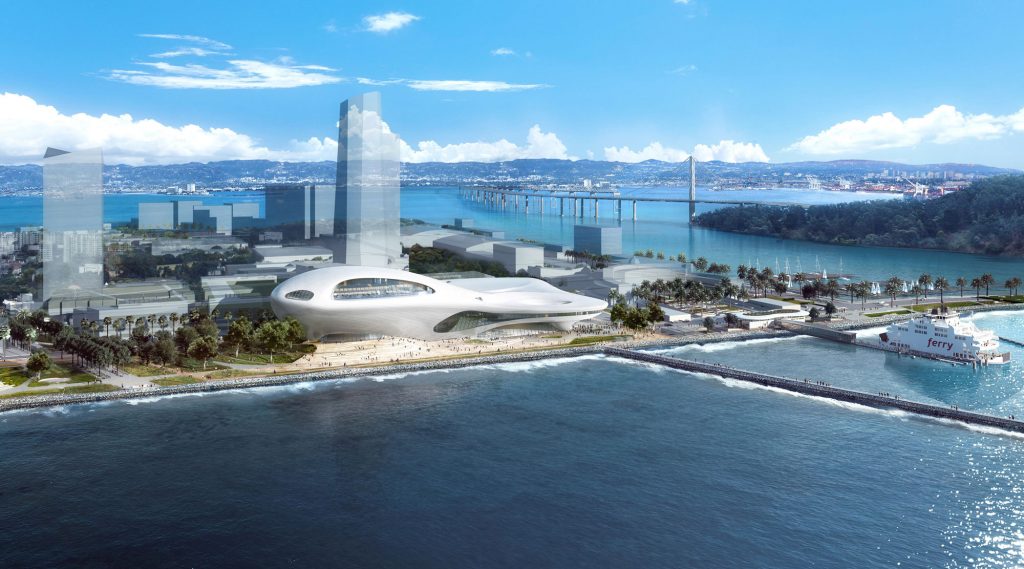 The Lucas Museum as it would look on San Francisco’s Treasure Island.

And what will be on the walls of the museum? Controversies about public land use have overshadowed some writers’ nagging efforts to belittle the works likely be on display in the museum. Attempting to fend off these complaints, a museum executive gave Charles Desmarais, San Francisco Chronicle art critic, a personal presentation about the works being donated to the museum. Desmarais has pronounced them worthy:

Leaning against the walls and sprawled on tables is a selection of 55 original drawings and paintings, as well as eight thick notebooks containing more than 700 photographic reproductions of works in Lucas’ art collection. All are slated to become part of the first holdings — the Seed Collection — of the long-planned Lucas Museum of Narrative Art.

Guiding me through the images, which were brought here just for our meeting, is Don Bacigalupi, the museum’s founding president and a much-credentialed art historian and museum director. Bacigalupi says the museum will eventually have its pick of the rest of the collection — about 10,000 paintings and works on paper and 30,000 film-related objects — that the renowned filmmaker has assembled over a period of 40 years and that is still growing.

It seems nearly everyone has an opinion about the collection of the Lucas Museum, which made Bacigalupi its first professional staff member last year. “It’s a ‘Star Wars’ museum,” some have said. “It’s a Hollywood memorabilia museum.” On Twitter, Los Angeles Times art critic Christopher Knight called it “George Lucas’ planned Treacle Museum.” But who has actually seen the collection? Only a few people, says Bacigalupi — and no journalist. Until now.

Having had the first opportunity to evaluate the collection, I am glad to say it is none of those things. In fact, it may just be the core of a great museum.

San Francisco officials are hoping their city has a stronger claim on Lucas’ affections than Los Angeles.

“We’d like to think their heart is here,” said Adam Van de Water of the San Francisco Mayor’s Office of Economic and Workforce Development. “He lives and works here, it’s a spectacular site, and we think it’s a natural fit.”

But the decision could come down to which city is able to get the museum through its legal approval process most quickly.

According to Don Bacigalupi, the museum’s president, the design work and search for approvals are being done simultaneously in Los Angeles and San Francisco. Within the next two to four months, Lucas and his team will decide which location offers the clearest path to starting construction in a year or so, with opening day three years later.

12 thoughts on “Where Will George Lucas’ Spaceship Land?”