Yesterday Nnedi Okorafor announced HBO is developing her novel Who Fears Death as a series.

My World Fantasy Award winning novel WHO FEARS DEATH has been optioned by HBO and is now in early development as a TV series with George R. R. Martin as executive producer.

Note: This did not happen overnight. It’s been nearly 4 years coming.

The news received widespread attention in the media from those who rely on items with a GRRM connection to generate clicks. However, Okorafor pointed out Vice’s report “George R.R. Martin Is Adapting an African Sci-Fi Novel for TV” as being especially problematic:

Wow, these people have even removed my NAME from my novel's cover in the tweet. Woooooooow, mschew. ?. They don't even know details. https://t.co/HacaZKMRQi 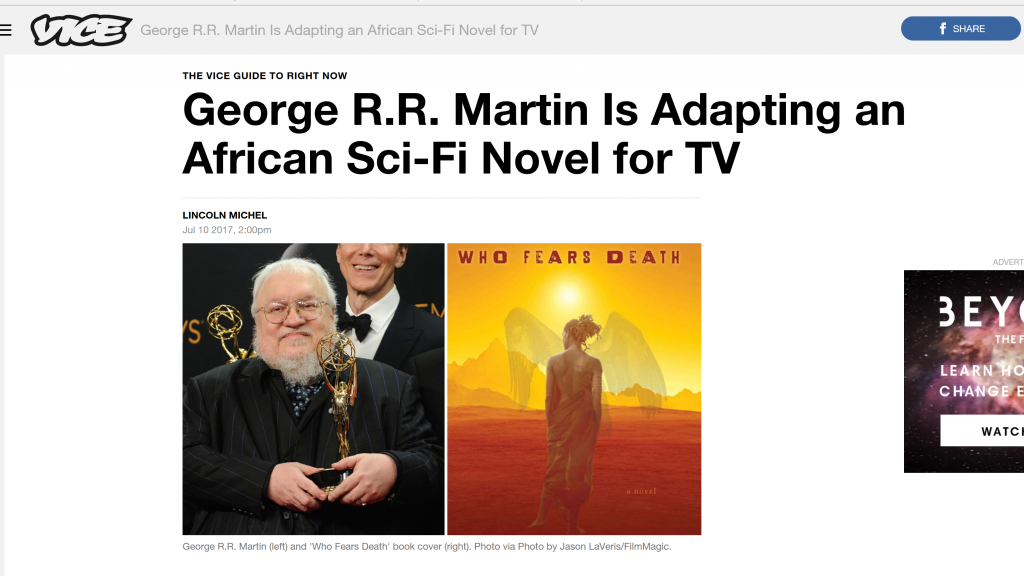 Lincoln Michel, the article’s author, hastened to assure Okorafor that the graphics weren’t his fault. Okorafor’s name is prominent in the actual text of his news item —

The ‘Game of Thrones’ creator has reportedly been tapped to executive produce Nnedi Okorafor’s ‘Who Fears Death’ for HBO.

When Game of Thrones ends, it will leave a smoldering dragon-sized hole in HBO’s lineup. To fix that, the prestige TV network has naturally turned to GOT creator George R.R. Martin to fill it with a slew of potential spinoffs. Additionally, it looks like Martin could be involved in bringing another show to the network that’s not based around his fantasy universe, but rather that of science-fiction writer Nnedi Okorafor’s apocalyptic Africa.

And George R.R. Martin has written a blog entry to make things clear about his role as an Executive Producer.

As usual, however, the internet is blowing this story all out of proportion, at least in regards to my own participation.

I will not be writing the pilot script or adapting Nnedi’s novel, and it’s doubtful that I will write any episodes should we go to series. Look, I probably won’t be writing episodes of ANY television shows until WINDS OF WINTER is done and delivered, and that goes for the five GAME OF THRONES successor shows as well. Other writers will be scripting those pilots, and the same is true for WHO FEARS DEATH. Last week we spent most of an afternoon interviewing some great young talents, in hopes of finding the right person to script the pilot. I was part of that process, and Nnedi was too. No deal yet, but we may have an announcement soon.

10 thoughts on “Who Fears Erasure?”