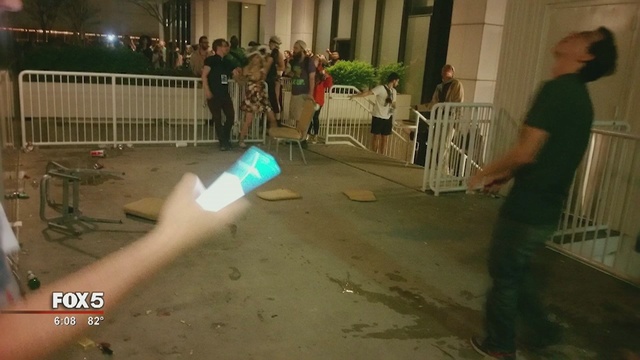 Where the chairs landed outside the Marriott Marquis

Kelly McDaniel was walking in a first floor area of the hotel when one of the chairs hit her in the head. After treatment at the hospital, which used two staples to close the head wound, she gave an interview to reporters.

“I feel this sharp pain and I thought maybe someone hit me with a water bottle saw chairs everywhere and someone dragged me inside. It was complete chaos,” said McDaniel.

In fact, she’d been injured by a chair. As she told the local CBS reporter (“Woman hit in head after chair is thrown from hotel’s 10th floor”):

“It was just so much blood,” she told Channel 2’s Rikki Klaus….

Paramedics rushed her to the hospital dressed in a Loki costume from the Avengers movies. McDaniel thinks the costume helped lessen the blow from the chair.

“I really think that saved my life,” she said.

McDaniel was one of two women who were hurt, police say. Both women were treated at the hospital and released. McDaniel is urging witnesses to call police.

“I think they need to punished by the law for assault with a deadly weapon. I could have been really hurt,” she said.

The Director of Media Relations for Dragon Con sent the Atlanta CBS affiliate the following statement:

Two women at Dragon Con were injured at the convention early Sunday morning when two chairs were dropped from an outside balcony on the 10th floor in the Marriott to a landing below. The women were treated and released at separate hospitals. We are grateful that the injuries were not more severe.  And we are proud of the Dragon Con attendees who stepped up quickly, realized the severity of the situation and provided immediate assistance.  Atlanta Police Department is investigating.