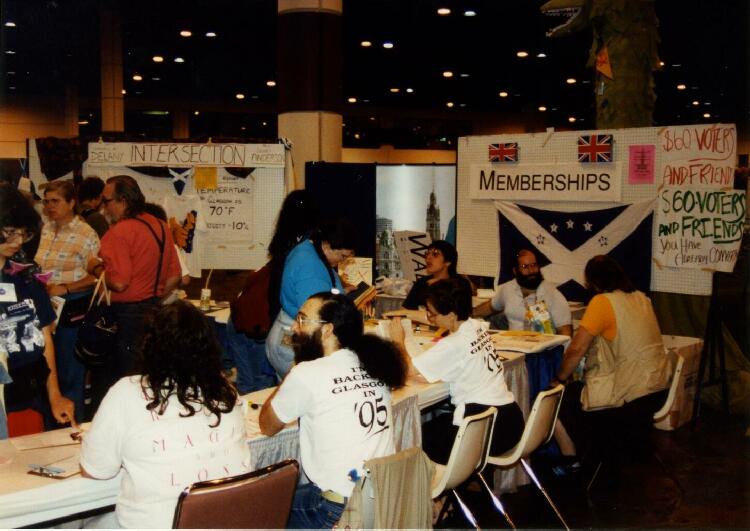 INTRODUCTION. Twenty-five years ago MagiCon was held in Orlando, Florida. A great con, and I thought it would be fun to reprint the report I ran in File 770. Here is the fourth of five daily installments.

The official 1995 Site Selection results were made public at the Sunday Business Meeting.

GLASGOW’S SEVEN PERCENT SOLUTION. Glasgow will host Intersection, the 1995 Worldcon, having outpolled Atlanta by seven percent out of a record-setting 2,544 valid ballots.

Intersection’s Guest of Honor will be Samuel R. Delany, and its Guest of Honour will be Gerry Anderson. Think about it. The committee intends to wait a year before announcing its fan guest. Venue for the con will be the Scottish Exhibition and Conference Centre and the adjacent Moat House International Hotel, from August 24-28, 1995.

MagiCon avoided repeating last year’s night-long vote count by validating all ballots cast on site as they were turned in to the voting table. (Validation consisted of checking that the voter was a member of MagiCon and had paid the voting fee. Membership transfers were also checked to insure just one vote was cast per membership.)

Debate has broken out whether the record-high vote was actually a financial setback for Glasgow. Proponents may be referring to the extra hundreds of people who joined to vote for Atlanta and having automatically become supporting members must receive convention publications at added cost to the committee. It is expected most such voters will never convert to attending members, leaving it open to question how much of their $20 fees will have to be spent for mailing costs.

1995 NASFIC BIDS. Promptly following the announcement of Glasgow’s victory, the WSFS business meeting switched on its NASFiC selection machinery. The constitution calls for a North American Science Fiction Convention tobe held in years when the Worldcon is awarded overseas, and requires that the choice of site be made in a ridiculously short time, even less than allowed for the three Christmas ghosts to straighten out Ebeneezer Scrooge.

NASFiC site selection administrator Kevin Standlee set a 10 p.m. Sunday deadline for bids to be filed and waited til the last minute at a central location in the Convention Center for the I-95 in ’95 crew to complete its filing. Unlike the losing Atlanta/Don Cook Worldcon bid, the I-95 hoax Worldcon bid (“Roadkillcon”, Christopher O’Shea chair) wanted to enter the NASFiC race. Bids were also filed by an Atlanta/DragonCon committee (Ed Kramer, chair) and a New York City committee (Thom Anderson, chair). Under the rules, a bid is not adequate unless it provides a letter verifying it has facilities reserved for its proposed convention date and Standlee rejected the first I-95 filing on those grounds. According to Standlee, even a reservation for one room-night in a hotel on the proposed date would be “adequate” for filing purposes, but there aren’t many places equipped to reserve a hotel room three years in advance. Finally, at the stroke of 10 o’clock, running across the convention center floor with the same painful urgency as athletes in a slow-motion shot from Chariots of Fire, came the I-95 bidders. In hand was a one-night room reservation they had persuaded the night clerk at a DC beltway hotel to accept and fax to them.

NASFiC site selection voting was conducted on Monday. (To be continued….)

CALLING ALL PROS. The Asimov Memorial Panel, said Tony Lewis, featured Harlan Ellison calling from LA (and making discordant swipes at Andy Porter.) Robert Silverberg offered many warm reminiscences of Isaac. In fact, Lewis asked Silverberg, “Will you say nice things about me at my memorial?” Silverberg agreed, “Certainly, but don’t make it too soon. It’ll take a long time to think up nice things.”

A phone link also brought Arthur C. Clarke together in public conversation with his brother, Fred, who actually attended the con and displayed treasure that Arthur had retrieved from the floor of the Indian Ocean while diving. Two 10-minute phone calls to Sri Lanka were sandwiched around showing a 52-minute video of the Minehead Space Festival, held in the brothers’ birthplace to celebrate Arthur’s 75th birthday.

20th ANNIVERSARY RANQUET: Sunday marked the 20th anniversary of a popular Worldcon event not usually reported in Locus out of deference to the laws of libel: the Ranquet. First held at McDonalds by Elst Weinstein and seven other fans who couldn’t afford $8.00 for the 1972 Worldcon banquet, the Ranquet ironically has outlived traditional Worldcon banquet dinners and typically attracts 50-70 attendees. Spurned by the nearest McDonalds, which already had more tourist trade than it needed, Elst turned to a Sizzler two blocks from the convention center. 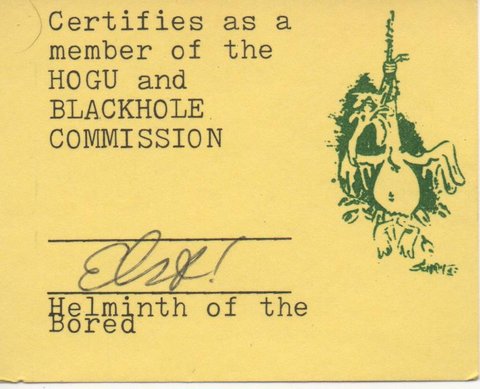 Sometime in the past 20 years, the Ranquet acquired a tradition of having pro guests of honor such as Vic Milan, Glen Cook, Steve Barnes, Lawrence Watt-Evans and George Alec Effinger. New York fans, who always turn out in force, and Watt-Evans, used GEnie to persuade Esther Friesner to be this year’s guest. 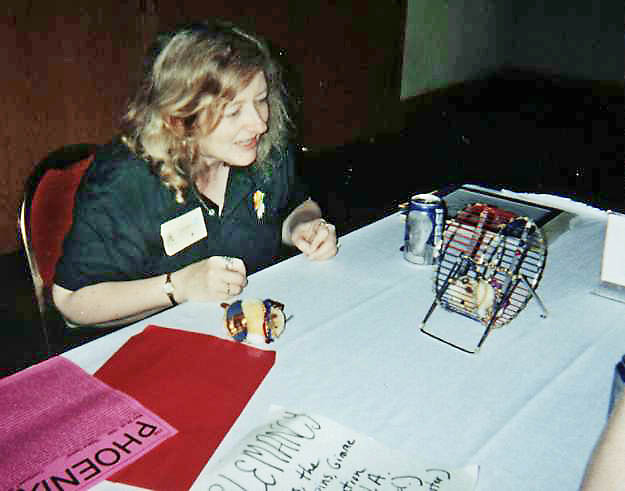 Once presented by Elst Weinstein, Friesner began the ceremonies: “It is an honor to be introduced by your toastmaster. Toastmaster is like the Beastmaster, only crummier.” Mentioning her “Ask Aunt Esther” etiquette column for Pulphouse, she launched into a demonstration of Ranquet manners. Advising listeners how to lobby votes for the “Hogu” (a hoax award given at the Ranquet), she said the way to coerce people to vote, politely and correctly, was through bribery. “Always make sure the money is clean — you can always send it out to be laundered.” She paused, “Remember — blackmail is an unreliable method because some of the people might be pleased to have the details published!”

The mixup with the fanzine Hugo had already passed into legend by Sunday. Elst made an intentional mistake announcing I was the recipient of a souvenir certificate, then taking it back and “correctly” presenting it to Dick and Nicki Lynch. And sitting behind the Lynches was Darrell Schweitzer wearing this button: “For all I know, I might have won a Hugo.” [For the full story on the buttons, see Scott Edelman’s blog post.] 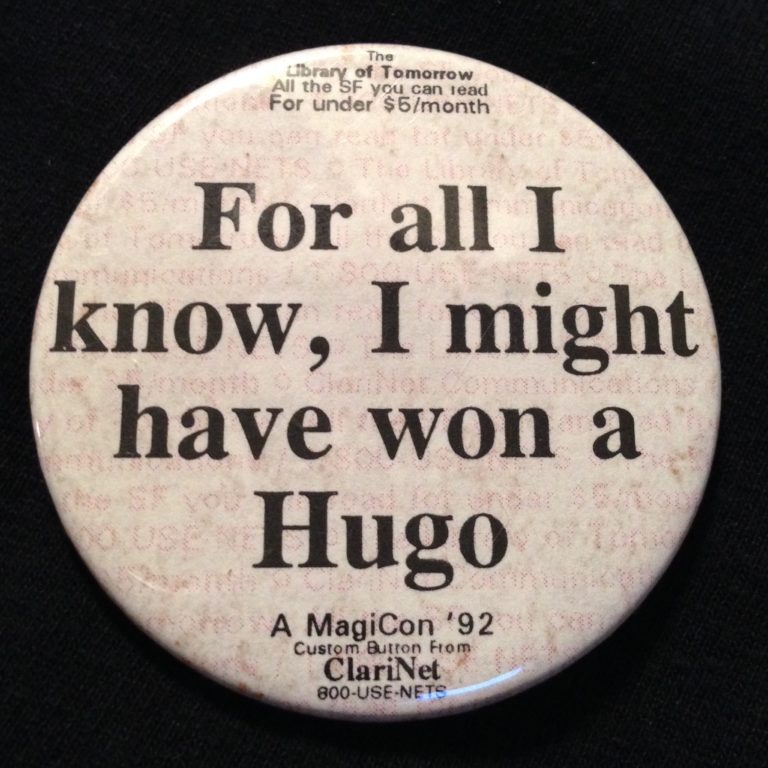 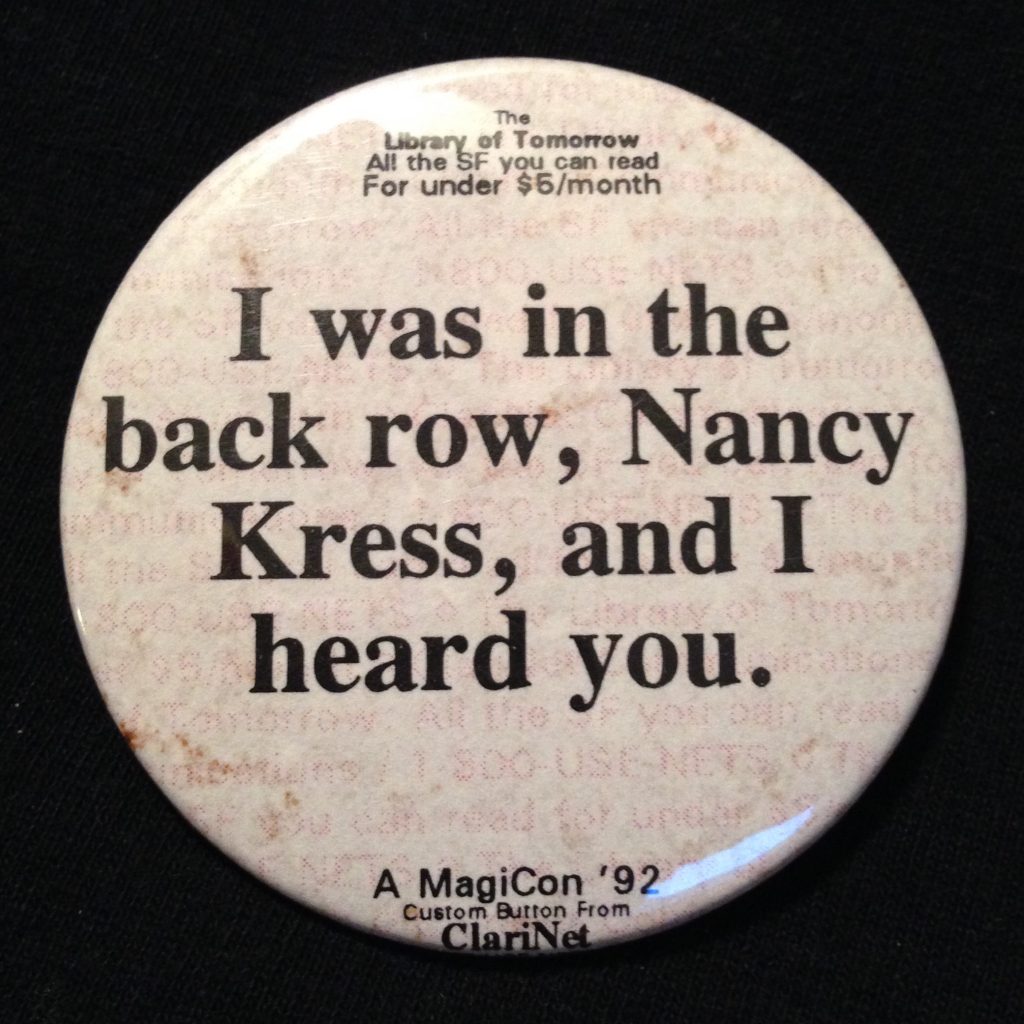 The Hogu Ranquet was held at a local Sizzler restaurant (almost makes you long for the bad old days when it was at McDonald’s) and featured Guest of Honor Esther Friesner. The results of the Hogu and Blackhole awards were printed in the hoax zine and a list follows.

[List taken from Perianne Lurie’s MagiCon report in The WSFA Journal. One look at these and I’ll be you can guess what was in the news in 1992.] 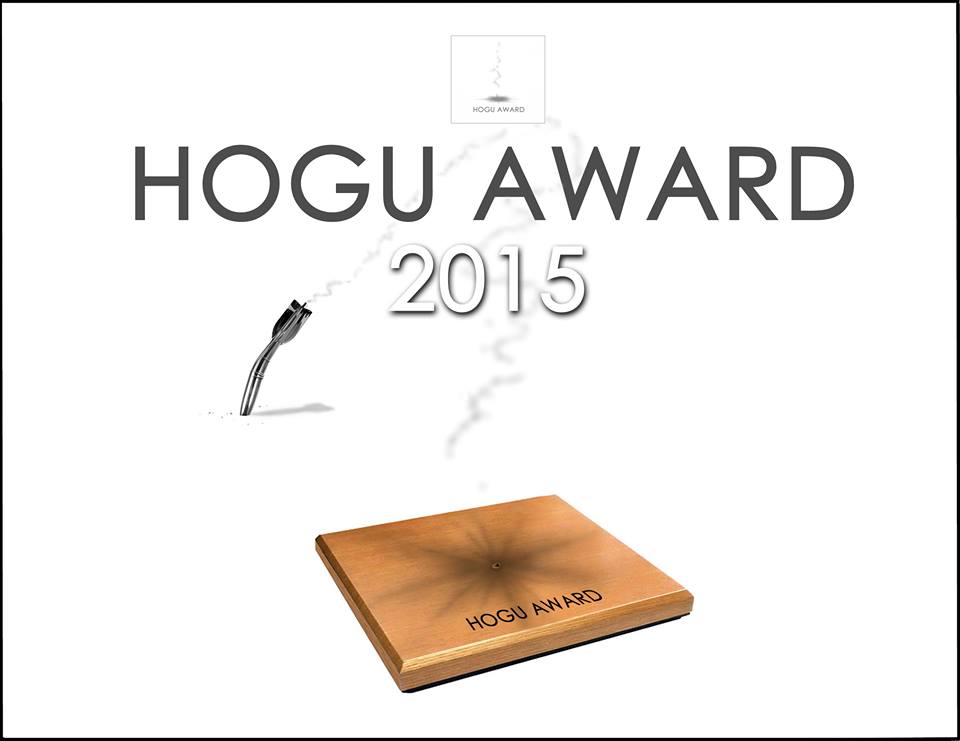 Taral Wayne’s depiction of the Hogu Award from the 2015 revival.

MASQUERADE. I didn’t write up the Masquerade for my report. However, it was very successful.

Best in Show went to “Heroes”, which made such an impression that Camille Bacon-Smith devoted a page to it in her book Science Fiction Culture (2000). 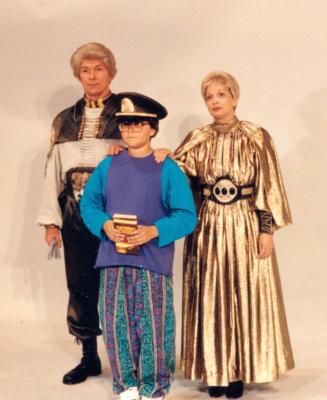 Photos of costumers at MagiCon are hosted on Fanac.org.