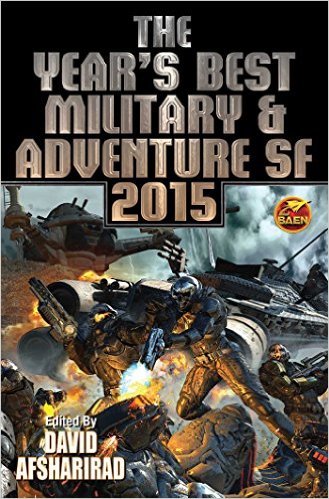 Baen Books released the paperback of The Year’s Best Military and Adventure SF 2015, edited by David Afsharirad, on June 7.

File 770 got an advance look at the table of contents in March, and in April announced the opening of online voting for the associated Readers’ Choice award for the best overall story in the anthology. Voting continues until August 31.

Baen now has posted some preview material from the volume.

David Afsharirad says in his Preface:

When assembling the first volume in the series, I asked Baen publisher Toni Weisskopf about those stories that were excellent but were only kinda sorta space opera and/or military SF. Would we rather have superlative stories that didn’t quite fit the theme of the book, or merely great ones that certainly did fit the theme? We both agreed that we’d be willing to stretch the definitions to ensure that we got the best of the best. And stretch we did, though I should say not to the breaking point. For this year’s volume, we decided that the old title just wasn’t inclusive enough. Hence the name change to The Year’s Best Military and Adventure SF. And now, as Paul Harvey used to say, you know the rest of the story.

David Weber explains in his Introduction:

Military sci-fi comes in all flavors, but good military sci-fi, enduring military sci-fi, is seldom of the “fluff” type. Seldom what I think of as “splatter porn” or of the sort that romanticizes the ugliness of combat and the taking of human life or suggests the “good guys” will get off without paying a horrible price of their own simply because they’re the good guys. I’m not saying all of it has the gritty realism of a Drake, and I’m certainly not saying “good” military sci-fi has to be an anti-military screed. But as Toni Weisskopf once pointed out in a conversation with me, there’s a distinct difference between military science fiction and militaristic science fiction. The biggest difference is that the former is normally written by someone who at least has a clue about how militaries and warfare work whereas the latter is written by someone who doesn’t have a clue about how they work but thought it would be really cool to write about a war.

Click here to find out how to vote for The Best Military and Adventure Science Fiction Reader’s Choice Award. The award-winning story will be announced at Dragon Con.