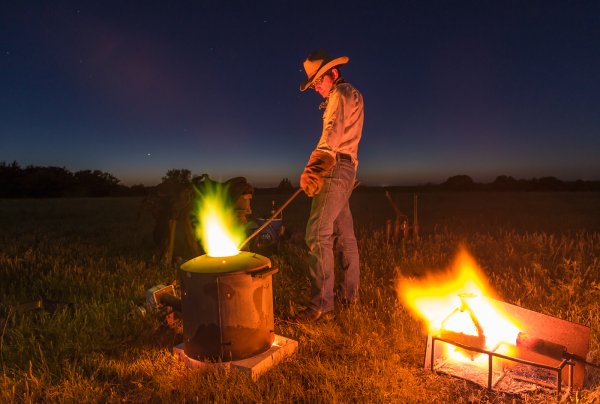 Artist casting the 2013 Hugo Award base.

The 2013 Hugo Award base will be designed by Texas-based artist Vincent Villafranca. Vincent is a Chesley Award-winning sculptor who produces futuristic and fantastic bronzes using the traditional lost-wax casting process. In keeping with tradition, the design will not be revealed until the convention itself.

SAN ANTONIO, Texas – LoneStarCon 3, the 71st World Science Fiction Convention (“Worldcon”), is pleased to announce that the 2013 Hugo Award trophy base will be designed by Texas-based artist Vincent Villafranca. Villafranca is a Chesley Award-winning sculptor who produces futuristic and fantastic bronzes using a traditional lost-wax casting process. Production of the 2013 bases is already well under way, although in keeping with tradition, the design will not be revealed until the convention.

The actual Hugo Award trophy takes the form of a silver rocket. The original concept by Jack McKnight and Ben Jason was inspired by the gleaming finned rocketships of Willy Ley. The exact design has become standardized in recent years and the rockets are currently produced by British fan Peter Weston. The base on which the rocket is mounted is, however, the responsibility of each Worldcon committee, and the design changes each year, usually inspired by the location of the convention.

LoneStarCon 3 is also pleased to announce that fans may now submit their final Hugo Award ballots online at www.lonestarcon3.org/hugo-awards/. The voting deadline is Wednesday, July 31, 2013, at 11:59 p.m. CDT.

More information about the Hugo Awards is available at www.LoneStarCon3.org/hugo-awards/.