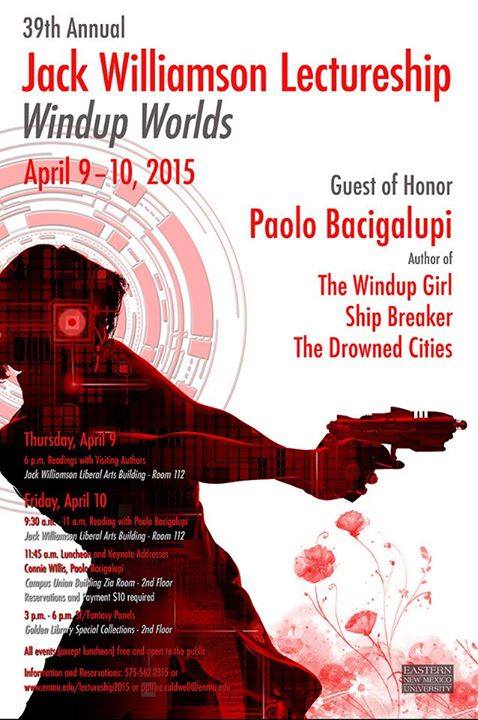 Highlights of events planned for the 2015 Jack Williamson Lectureship at Eastern New Mexico University in Portales (April 7-10) have been summarized in an e-mail from Williamson publisher Stephen Haffner.

Lectureship Luncheon
Friday, April 10th, 11:45 a.m. ENMU, Campus Union Ballroom (lunch tickets are $10). Reservations for the lectureship luncheon can be made by calling 575.562.2315 or emailing Patrice.Caldwell@enmu.edu. The price is $10, payable at the door.  Reservations must be received by Monday, April 6th. 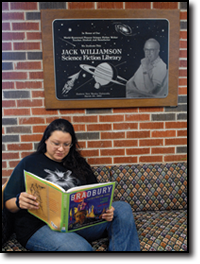 Young Writers Workshop
Saturday, April 11th, 10 a.m. Noon Portales Public Library (reservations required). For aspiring young writers, a special workshop will be offered by authors Connie Willis and Steven Gould at the Portales Public Library on Saturday morning from 10 a.m. to Noon. Participants are encouraged to reserve a space by contacting the Portales Library, 218 S Avenue B, in Portales, at (575) 356-3940.

And thanks to the Haffner Press a great deal of good material by and about Jack Williamson is available to add to your collection:

At The Human Limit, The Collected Stories of Jack Williamson, Volume Eight: With a foreword by award-winning author and long-time friend of Williamson, Connie Willis, At the Human Limit represents the changing state of mid-20th Century American Science Fiction and concludes the documentation of Williamson’s unparalleled career.

Seventy-Five: The Diamond Anniversary of a Science Fiction Pioneer celebrates the first seventy-five years of Jack Williamson’s career in Science Fiction. From “The Metal Man” in 1928 to his recent Hugo and Nebula Award-winning novella “The Ultimate Earth,” inside are some of the best of Williamson’s stories, including excerpts of such classic novels as The Legion of Space, Golden Blood and The Legion of Time.

The Worlds of Jack Williamson: A Centennial Tribute (1908-2008) celebrates the 100th birthday of one of the Grand Masters of science fiction. While Jack Williamson passed away in 2006 at the age of 98, his incredible body of work continues to be enjoyed by legions of fans and admirers.

In Memory of Wonder’s Child honors the career of Grand Master Jack Williamson with memorial appreciations from friends, family and some of the most prominent members of the science fiction field.  Also included are Williamson’s 1939 pulp story “Nonstop to Mars,” his last work “The Mists of Time” from 2006, a facsimile reproduction of his 1928 editorial “Scientifiction, Searchlight of Science,” and pages from his 1950s newspaper comic strip, Beyond Mars.

35 Years of the Williamson Lectureship: This book collects transcripts of speeches and presentations from a variety of Lectureship guests from its first 35 years.