The 2018 Bulwer-Lytton Fiction Contest, where the challenge is to write the “worst” opening sentence to a novel, announced its winners in August, but it’s news to me!

Here are the categories of genre interest —

The professor had constantly warned his protégé about the time travel related risks of meeting a past version of yourself or killing your grandfather, but unfortunately he’d never mentioned the worst time machine risk of all — sticking your head out of the window.

Terellian Shapeshifters often blew their cover by taking subtly inappropriate forms — a squirrel that swims perhaps, or a chair with five legs — but Officer Max Throckmorton spotted this one immediately; every Human knows that bidets are NOT purple, and they usually aren’t installed next to a McDonald’s drink dispenser.

She stood out like a fifth appendage on the prehensile glandular dorsal fin of a love-sick marmoset from the twin-mooned planet of Hades VII in the Alpha-Centauri star system, but I thought she looked damned cute anyway because of the sailor cap she wore so jauntily.

Captain Calamari loosed a plasma bolt from his crossbow, but the charging cyborg knight hefted his magna-shield and deflected the sizzling violet flare into the dust, forcing the square-jawed hero to coolly reload his cumbersome, anachronistic weapon and wonder as he did why he couldn’t have a blaster pistol like Han Solo instead of being stuck in this weird hybrid cyber-medieval universe.

His steel sang as Dothrak, mighty thews febrile with barely-checked power, drew Aelthmor (the blade forged in eldritch shadows by the Zdrahali adepts) and declared, “All who have sworn allegiance to the False Duke will feel my wrath!” yet he was summarily admonished to silence, for it is at the Reference Desk of the Skokie Public Library that our story takes place.

Talila Norpiros, heir to the elven throne and commander of her people’s armed forces, chose a slightly more risqué outfit that morning than she would normally wear to battle, theorizing that if she were presented as a sex symbol as well as a dynamic protagonist, the series might attract a few more male readers and finally make the New York Times bestseller list.

Kravik the Helm-Cleaver gripped his Damarrian battle-axe and stepped into the inky blackness of the cave, wishing he had thought to bring a torch to illuminate the stalagmites or stalactites—whichever were the ones that hang down from cave-roofs to crack the cranium of a man who stands two meters tall—as he searched for Dwarf Kobolds, the vile creatures who, at less than half the barbarian’s stature, never had to worry about conking their scaly heads on stal–, stalac . . . pointy ceiling rocks.

Under a lurid dawn sun, the Usher Property was less baleful than it had been during the past evening’s abode-splitting weather event, and my practiced realtor’s eye – have I not mentioned my profession already? – recognized development potential once the tarn was drained and fissure remediated, perhaps to build an outlet of shopping at which consumers would dawdle, aghast at the scale of discount savings.

The wars between the Aarbollethi and the Deffalecci was now in its seventh haelon, and it is difficult to imagine they began when the Aarbollethian Ambassador to Deffalecci, when addressing the Deffaleccian Secretary of State, pronounced their nation’s common greeting, achdazar u zynthio as ashadar y thynzio, which, in the Deffaleccian tongue is an insulting reference to a hero from their classical mythology named Ashadarythyn, who was supposed to have murdered his Vareto and lain with his Amunna.

Although widely despised by his own kind, Kazimir Kilcescu was a hero to a few uninhibited vampires who adopted his “baby talk and Ugg boots” method of victim selection which, when applied correctly, largely eliminated the blood-curdling screams that otherwise left them the choice between letting their swooning prey go scot-free or choking down two liters of curdled O-pos.

The witches cackled in glee, an eye of newt emanating a very satisfying ‘pop’, the ear of a pixie providing a heady scent, and the chest hair from a burly princeling for some zing, as they tipped them into a dark cast iron cauldron, only for Millicent the youngest of witches to wonder whether they sold more contemporary cauldrons in Williams Sonoma and if they had a free delivery option.

And if you’re curious, this is the 2018 Grand Prize Winner: 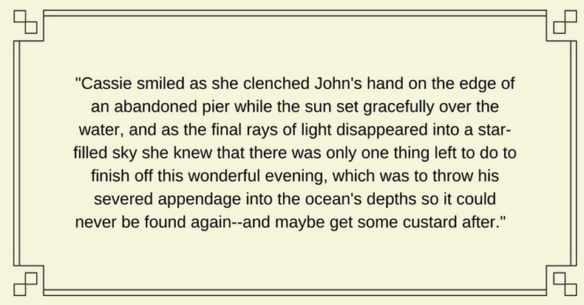 The winner of the XXXVth Lyttoniad is Tanya Menezes, who at seventeen years old is the youngest winner in contest history and the first from its hometown of San Jose.  Tanya describes herself as your average rowdy seventeen-year-old, but one who works at a local museum (where she occasionally has to remind guests that Mars is still a planet and that global warming exists even though it was cold when they visited Vermont).