Frank M. Robinson is the winner of the 2018 Cordwainer Smith Rediscovery Award announced at Readercon on July 13.

The juried award goes each year to a science fiction or fantasy writer whose work displays unusual originality, embodies the spirit of Cordwainer Smith’s fiction, and deserves renewed attention or “Rediscovery.” 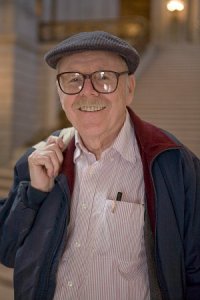 Frank M. Robinson died in 2014. Among his many novels, Robinson considered The Dark Beyond The Stars his best but said Waiting was the most popular. Several were made into movies: The Power, which starred George Hamilton and Michael Rennie, and two collaborations with Thomas N. Scortia, The Glass Inferno, produced as The Towering Inferno and starring everyone in Hollywood from Paul Newman to O.J. Simpson, and The Gold Crew, retitled The Fifth Missile for the screen.

See his entry in the Encylopedia of Science Fiction here.

[Thanks to Robert J. Sawyer for the story.]