The Libertarian Futurist Society has announced the 2018 Prometheus Award winners for Best Novel and the Prometheus Hall of Fame – Best Classic Fiction. 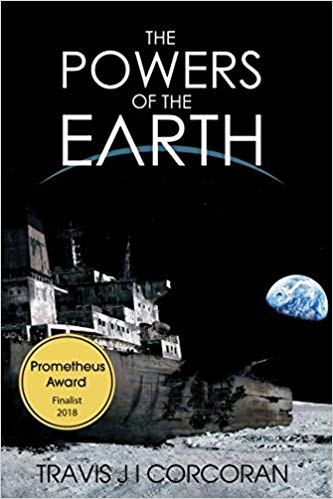 The Powers of the Earth (Morlock Publishing), the first volume in The Aristillus Series, is set in a near-future ungoverned lunar settlement, developed while Earth leaders ignored and denied its existence. The settlement struggles to retain its independence from Earth’s invading force in Corcoran’s panoramic story about people carrying on their lives in liberty. Corcoran’s novel is both a tribute to Robert Heinlein’s classic The Moon is a Harsh Mistress, and a re-examination of its assumptions about how such a lunar colony would function, and what kinds of people would live there.

Williamson (1908-2006) was the second writer after Robert Heinlein to be named Grand Master of Science Fiction (in 1976) by the Science Fiction Writers of America. His novelette “With Folded Hands …”, inspired by Williamson’s lifelong distrust of “benevolent” but intrusive paternalism and published in 1947 in Astounding, launched his Humanoids Series (including the 1949 novel The Humanoids and the 1980 sequel The Humanoid Touch) which explored the disastrous and authoritarian implications of powerful new technology (robots with an imperative to control and protect humans) to undermine individual liberty and moral autonomy.

Other Hall of Fame finalists:

The annual Prometheus Hall of Fame award is open to works published or broadcast at least five years ago in any narrative or dramatic form, including novels, stories, stage plays, film, television, other video, graphic novels, song lyrics, or epic or narrative verse.

The Prometheus Award, sponsored by the Libertarian Futurist Society (LFS), was established and first presented in 1979, making it one of the most enduring awards after the Nebula and Hugo awards, and one of the oldest fan-based awards currently in sf.

The Prometheus Awards include a gold coin and plaque for the winners – with a one-ounce gold prize for Best Novel and smaller gold coins for the Prometheus Hall of Fame and the occasional Prometheus Special awards.

For close to four decades, the Prometheus Awards have recognized outstanding works of science fiction and fantasy that dramatize the perennial conflict between Liberty and Power, favor cooperation over coercion, expose the abuses and excesses of government, critique or satirize authoritarian ideas, or champion individual rights and freedoms as the mutually respectful foundation for peace, prosperity, progress, justice, tolerance, mutual respect, and civilization itself.