(1) A GREEN AND ANCIENT LAND. Justin Hamelin strolls through Bradbury’s childhood hometown of Waukegan in “Ray Bradbury: The Wordsmith, The Gentleman and The Icon” at Terror Time.

Over eighty-five years have passed since Ray Bradbury walked the streets and crossed the bridges of Waukegan as a boy, but his legacy in the town does, indeed, live on.

Annual events such as the Ray Bradbury Storytelling Festival occurs every Halloween in Waukegan.  The Dandelion Wine Fine Arts Festival occurs each summer, as well.  The library, albeit in a different building than the one Ray grew up in, holds several contests and programs throughout the year inspired by Bradbury and his work, as well.

The Carnegie Library still stands today and is in relatively good shape.  A local movement to have the building deemed a national landmark continues to pick up momentum with each passing month.  Currently, the library is listed on the National Register of Historic Places and is a local landmark building.  One of the many things I learned recently is that the Carnegie building is also a PokeStop in the Pokemon Go game, which would no doubt illicit a chuckle from Mr. Bradbury, I’m sure.

(2) HALL OF FAME CALLS. Ray Bradbury was inducted into the California Library Hall of Fame in 2016.

One of the greatest and most prolific authors of the 20th-century, Ray Bradbury was a passionate supporter of libraries, calling them “the center of our lives.” A 1938 graduate of Los Angeles High School, Bradbury sold newspapers on the street until 1942, continuing his education at his local public library. His most beloved work, Fahrenheit 451, famously began as a novella, The Fireman, in UCLA’s Powell Library, where he fed dimes into a pay typewriter. Bradbury was proudly self-educated in libraries, proclaiming that he didn’t believe in colleges and universities–instead he believed in libraries! He once joked to the NY Times that he spoke for free at over 200 California libraries. He also allowed libraries to sell his autographed books and keep all the profits. Bradbury spoke at California Library Association annual conferences and constantly sang the praises of California libraries. When libraries in Pomona, Long Beach, Ventura, South Pasadena, and other areas were threatened with budget cuts and even closure, he was an outspoken, articulate, and attention-getting advocate for their survival. In 2004 Bradbury was awarded the Medal of Arts Lifetime Achievement Award and, in 2007, the Pulitzer Board recognized him with a Special Citation for his incredible lifetime achievements. A crater and an asteroid are also named after him, plus he has a star on the Hollywood Walk of Fame.

(3)  HOLLYWOOD ICON. LA Weekly reports the closing of the Formosa Café in West Hollywood, where Ray Bradbury would have lunch/dinner with the likes of Sam Peckinpah and John Huston.

Its neighbor was the Mary Pickford– and Douglas Fairbanks–owned studio complex, later known as Samuel Goldwyn Studio, then as Warner Hollywood Studios and finally as Lot Studios. A group called Friends of the Formosa saved the structure from demolition in the early 1990s, though five nearby studio buildings ultimately were razed. The West Hollywood Gateway project next door, which includes a Target and a Best Buy, towers over the Formosa, but its street-clogging traffic doesn’t appear to have nourished the eatery with sustainable business.

This scene of L.A. Confidential was shot there.

(5) LESS THAN 24 HOURS LEFT. And only rich men can afford this Bradbury script on eBay —

(6) YOUR WHALE-SHAPED CRAFT. Maria Popova quotes from “Ray Bradbury’s Unpublished Poems and His Meditation on Science vs. Religion” at Brain Pickings.

In the last few years, I have found myself returning again and again to the problem of science and theology. This problem has thrust itself into the center of a series of poems I have written. I have for some time now thought that the conflict between religion and science was a false one, based, more often than not, on semantics. For when all is said and done, we each share the mystery. We live with the miraculous and try to interpret it with our data correctors or our faith healers. In the end, survival is the name of the game.

One upon a time we created religions which promise us futures when we knew there were no possible ones. Death stared us in the face, forever and ever.

Now, suddenly, the Space Age gives us a chance to exist for a billion or two billion years, to go out an build a heaven instead of promising one to ourselves, with archangelic hosts, saints waiting at Gates, and God pontifical on his Throne.

(7) 451. She chose Bradbury. Fate chose her: “Student at University of Texas in Austin Wins a New Hardback Book a Month for Life”.

Heywood Hill, the legendary independent London bookshop, announced today that Mariadela Villegas, a third year student at the University of Texas in Austin, has won the Library of a Lifetime, the world’s first major literary prize focused on readers of books. To win, readers entered the name and author of the single book that has meant the most to them, drawn from any book published in English since Heywood Hill was founded in 1936—eighty years ago this year. The bookshop received more than 50,000 submissions from more than 100 countries during the submission period, October 1 – 31, 2016, and Villegas was notified on November 25th that she had won the grand prize: one newly published and hand-picked hardback book per month, for life, delivered to her home….

Villegas submitted Fahrenheit 451 by Ray Bradbury for the competition, describing her choice with the following: “The mere thought of a world where books are forbidden both fascinated and terrified me. The idea of a band of nomads who are the only remaining links to great works of literature kept me up at night imagining what it would be like for them to know that if something were to happen, a literary classic would be lost forever.”

(8) RETURN TO THOSE TITILLATING DAYS OF YESTERYEAR. Omni reprinted a Ray Bradbury interview that originally appeared in Genesis, a softcore magazine, which accounts for why every question is about sex.

Why is there very little sexuality in your work?

I think it’s because I have no hang-ups. People often say to me, “How come you don’t fly? You don’t drive? Isn’t that ridiculous for a science-fiction writer? How do you explain this paradox? You’re writing about these things and you don’t do them.” And I say, “Of course, that’s exactly it.” A writer writes about those things that he can’t do. His hang-ups. Now I was afraid of the dark until I was twenty-one, twenty-two years old. Perhaps some of that is still in me. So my first books are excursions in darkness, trying to make do with my fears. And out of these weaknesses I made strengths. So it is with sexuality. If sex doesn’t appear in my novels, I must be giving forth these energies, exploding my sexual energies in correct proportions. Loving people in just the right way. So I don’t have to write about them.

(9) THE GRADUATE. Entropy tells the story of the Bradbury mural at his alma mater – “Learning from Masters: Ray Bradbury and Richard Wyatt Jr. at Los Angeles High School”.

The idea to paint a mural at Bradbury’s alma mater was an event that gradually unfolded and it began ironically enough at an iconic Los Angeles restaurant less than a mile east of Los Angeles High School. The eatery is El Cholo on Western and the reason it all started here is because a teacher from the school, Sonia Hanson was eating there over a year ago and she somehow struck up a conversation with Richard Wyatt Jr. while he finished his meal a table over. After having a great conversation, Wyatt gave Hanson his card and let her know to contact him if he could ever help the school and her in any way.

Flash forward several months to October 2015 and Sonia Hanson was in a meeting with librarian Tikisha Harris discussing Ray Bradbury and how they can get the school interested and involved in Fahrenheit 451 for the citywide initiative called “The Big Read,” which had selected Bradbury’s Fahrenheit 451 as the book for the year. “The Big Read,” is an initiative of the National Endowment of the Arts where libraries, schools and cultural organizations unite together to all read the same book. The Los Angeles Department of Cultural Affairs spearheaded the project throughout the city, distributing copies to participating schools and libraries. In the midst of brainstorming how their school could participate, the idea came up of painting a mural of Bradbury in the library. 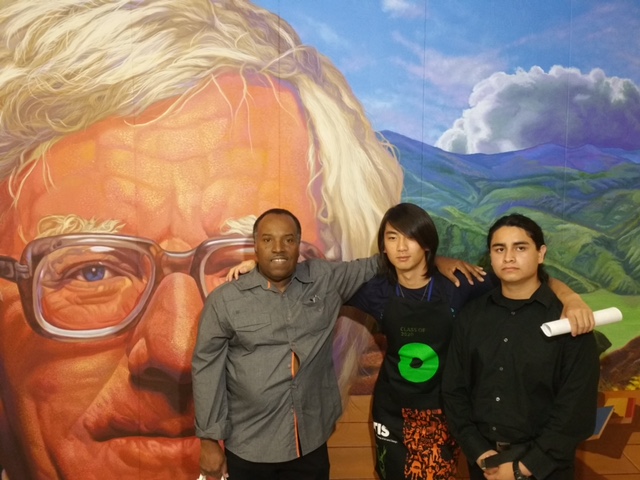 8 thoughts on “A New Year of Bradbury”