By James H. Burns: I just spent a rather extraordinary 83 minutes watching the 2013 documentary about artist Jeff Jones, Better Things: The Life and Choices of Jeffrey Catherine Jones (available on DVD).

Jones first earned attention for a series of fantasy and science fiction illustrations, and paperback covers. 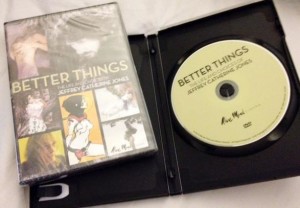 To me, it was wonderful to see so many familiar faces from the 1970s and 1980s. (There’s a plethora of terrific photos from the fantasy and comics scene of the time — including a lovely, unexpected pic of the great Roy Krenkel — as well as some endearingly evocative shots from 1960s New York City.)

I’m a bit surprised that the film seems to have gained only partial notice, for surely any fan of the artist — or devotees of Michael Kaluta, Bernie Wrightson, or Moebius (also featured herein) — might wish to check this out. (There is also much information about Jones’ early contemporary, the late Vaughn Bode.)

But beware: this is a sad, and sometimes disturbing tale, with a couple of participants not coming off particularly well.

For those of us who only met Jones years ago, it can also be a surprise to see the artist here as a transgenderd woman. But truth be told, Jones doesn’t look all that different than one might have imagined if there had been a traditional aging process, albeit with the results of what the film reveals were clearly some stressful times. (Jones passed, in 2011.)

Could the project be considered exploitive? I hope not. The filmmakers, it seems to me, aspired to be gentle.

2 thoughts on “A Review of “Better Things””