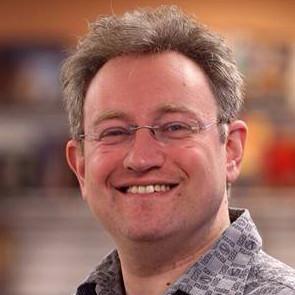 By Carl Slaughter: Alex Shvartsman is a busy guy. He’s been editing so many anthologies, his writing for such magazines as Mike Resnick’s Galaxy’s Edge has been on hold.

He’s still cranking out the Unidentified Funny Objects series. UFO #5 goes to the press next month and will be released in October. He’ll start taking submissions for #6 in a few months and is working on Funny Science Fiction, Funny Fantasy, and Funny Horror.

The Table of Contents for UFO #5 comes out next week. After doing comedy for a while, now he’s delving into hard science with Humanity 2.0, also out in October.

And what’s that secret project he’s been working on?  Now we know – last week Shvartsman announced The Cackle of Cthulhu anthology:

I’ve been sitting on this news for months. It’s the secret project I was hinting at in my anthology update a few weeks ago. But now that the contract is signed, I can finally announce that I will be editing an anthology for Baen!

The Cackle of Cthulhu will be an anthology of Lovecraftian humor, half reprints and half original fiction.