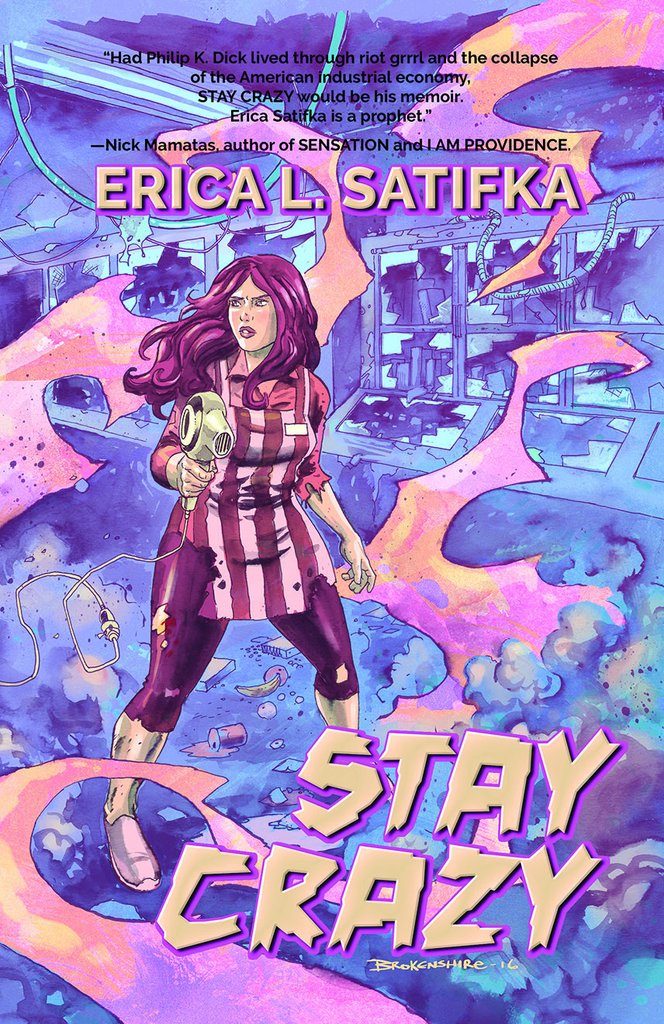 By Carl Slaughter: Erica Satfika’s Philip K. Dick-inspired debut novel is out next month. The art and jacket copy are ready. Preliminary reviews on Goodreads are mostly 5 star. I have to say, the plot is refreshingly different. Interesting cover too. What’s that the protagonist is holding in her hand as if it were a raygun? A blowerdryer!

“Had Philip K. Dick lived through the riot grrrl and the collapse of the American industrial economy, Stay Crazy would be his memoir. Erica Satifka is a prophet.”

Nick Mamatas, author of Sensation and I Am Providence.

After a breakdown at college landed Emmeline Kalberg in a mental hospital, she’s struggling to get her life on track. She’s back in her hometown and everyone knows she’s crazy, but the twelve pills she takes every day keep her anxiety and paranoia in check. So when a voice that calls itself Escodex begins talking to Em from a box of frozen chicken nuggets, she’s sure that it’s real and not another hallucination. Well … pretty sure.

An evil entity is taking over the employees of Savertown USA, sucking out their energy so it can break into Escodex’s dimension. When her coworkers start dying, Em realizes that she may be the only one who can stop things from getting worse. Now she must convince her therapist she’s not having a relapse and keep her boss from firing her. All while getting her coworker Roger to help enact the plans Escodex conveys to her though the RFID chips in the Savertown USA products. It’s enough to make anyone Stay Crazy.

Stay Crazy is scheduled for release on August 16. Pre-order from Apex Book Company.