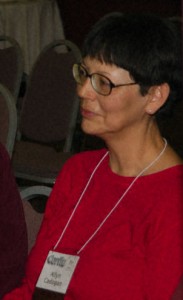 Part of the faannish trio who founded Corflu, Allyn Cadogan died of liver cancer on April 16 in Tucson, AZ.

The fanzine fans’ convention was the margarita-inspired idea of Cadogan, Lucy Huntzinger and Shay Barsabe during an evening in 1983 spent lamenting the marginalization of fanzine fandom at the big conventions. They held the first Corflu the following year in Berkeley.

Prior to moving to the Bay Area, Cadogan was an integral part of Vancouver’s vibrant fan community — editor of the local club’s BCFSAzine (August 1976-September 1977), and treasurer of Westercon 30, held at the University of British Columbia in 1977. 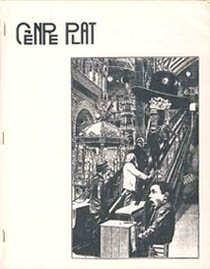 In 1977, Allyn Cadogan, Susan Wood, William Gibson and John Park also released the first two issues of Genre Plat, which Cadogan continued to publish solo once she set down in San Francisco.

What seemed a supremely important piece of esoterica in those days was the source of the title, a reference to a box of Kaybee toothpicks with a bilingual label saying “Flat style” in English, and in French, “Genre Plat.” Those of us who knew no French at all felt it added to the zine’s Canadian mystique.

Genre Plat was that rare fanzine able to maintain a faanish atmosphere while paying a great deal of attention to science fiction. The 1978 issue featured Cadogan’s interview of Kate Wilhelm at Westercon 30. Gibson had just sold his first short story in 1977, but was a few years away from hitting the big time, meanwhile wrote sercon for Locus and SF Review. Susan Wood, then a professor at the University of British Columbia, was actually the best known of the editorial quartet, winning the second of her three Best Fan Writer Hugos the year the zine began.

Cadogan would be associated with a more distinctly faanish zine when she co-edited Convention Girls’ Digest with Sharee Carton and Lucy Huntzinger in the 1980s. And along the way she also produced several issues of Bunnies, Zucchinis, & Sweet Basil.

In the mid-1980s she was married to Karl Mosgofian for awhile and the couple had their own company, Asta Computer Services.

She was wickedly funny, generous, enthusiastic, artistic, smart as hell. She was a very good friend.

3 thoughts on “Allyn Cadogan Passes Away”