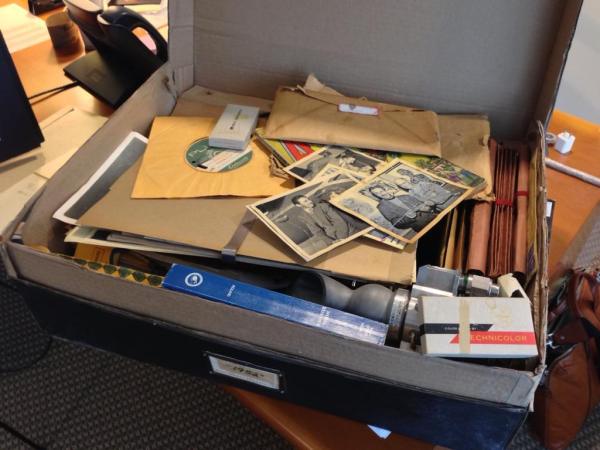 What is the movie Tomorrowland going to be about? Rather than tell us, filmmakers Brad Bird and Damon Lindelof are turning their project into an irresistible mystery. Lindelof has already proven with Lost he can hook people and keep them on the line for years.

The publicity mystery began with the release of photos of an old banker’s box labeled “1952” on the duo’s personal Twitter accounts. Widespread speculation about the contents of the box followed.

At last weekend’s D23 Expo the pair brought the mystery box onstage with them and spent their time rummaging through its contents.

There was a blueprint for the “It’s a Small World” attraction at the 1964 World’s Fair. Also, a 1928 issue of Amazing Stories containing a story titled “Armageddon 2419 A.D.” and a piece of cardboard with strategic cutouts that, when placed over the text of the tale, generated cryptic phrases like “I’ve seen across the gap.”

And, reports Hero Complex, there was a doctored photo —

Bird noted that “the very word ‘Tomorrowland’ is evocative,” and he and Lindelof showed the audience a photograph of Walt Disney with Amelia Earhart labeled “April 1945,” which, of course, is years after the famed pilot’s disappearance. The photo is, of course, a fake, Disney’s face was pasted onto the body of Cary Grant.

Lindelof said, “It’s our jobs as storytellers to say, What if this photograph was real?”

Others might say it’s their job as storytellers to tell us the story. Ah, but for that we have to wait until December 2014 — and buy a ticket.