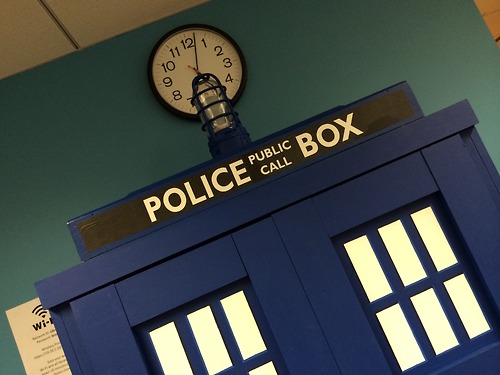 What’s that TARDIS doing in the Brookline Public Library?

The original blue icon was actually the library’s Awesome Box, an easy way for readers to recommend books to other users —

When patrons particularly enjoy items they have checked out, they drop them in the box rather than at the returns desk. Staff scan the items twice, once to check them back into the library’s collection and the other to add them to the “Awesome Box” webpage, where all the community’s selections are stored.

A School Library Journal report (“Bigger on the Inside”) explains the connection between the two ideas:

As any Doctor Who fan—like Brenner—knows, the TARDIS (Time and Relative Dimension in Space) disguises itself as a blue British police call box, though it is vastly bigger on the inside. Similarly, an “Awesome Box,” TARDIS-shaped or not, stuffs a universe of ideas into a tiny package.

Now the Brookline Public Library is home to a second, even bigger TARDIS replica that houses Summer Reading titles for kids — 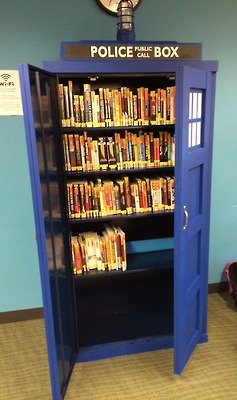 Brookline (MA) teen librarian Robin Brenner coordinated production of the box. She has assembled photos and notes about it on a Tumblr page. Her June 16 update says —

You all remember the Awesome Box, right?

Just arrived in the Teen Room is our next homage to The Doctor, our TARDIS shelves!  As you can see, it’s not QUITE full size, but it’s close.

Once again this was a project brainstormed by staff, including myself and one of our Trustees who is also a Whovian, Michael A. Burstein.  The creation of the shelves was executed beautifully by our custodians T. J. Mattimoe, Mike Malone, and Frank Hickey.  They built the exterior of the cabinet, I painted it all, and now we have our very own TARDIS to take readers away.

For the summer, the Brookline Summer Reading List titles (7-8th grades and the High School Lists) will be shelved inside the TARDIS.  What about after summer?  We’ll have to see.  Could be anything.

[Thanks to Michael A. Burstein for the story.]

Update 06/18/2014: Revised, after I figured out two different TARDIS replicas are involved.