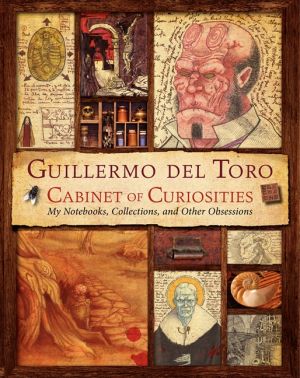 Guillermo Del Toro’s Cabinet of Curiosities: My Notebooks, Collections, and Other Obsessions shares the drawings, creatures, and ideas of things to come that fill the director’s private journals and filmmaking diaries.

Lavishly illustrated, the 260-page book also features an in-depth interview with the filmmaker conducted by Marc Scott Zicree, exploring the literary references, old films, and mythological figures that inspire him. And there is a tour of Del Toro’s second home, Bleak House, given over to his collections and working space.

Two pages of Del Toro’s artwork and notes from the book are reproduced in MTV.com’s “exclusive peek”.

fearlessly confronts life in all its beauty and horror. He sees with the wonder and stark terror of a child. His notebooks are a map of the subconscious, and his films doorways into the dungeons of our dreams, allowing us to confront our own individual hearts of darkness, to do battle and emerge victorious.

There is an afterword by Tom Cruise, and other contributions from Neil Gaiman, John Landis, and Alfonso Cuaron.

HarperCollins releases the book on October 29. Del Toro previews his creation in this video —

2 thoughts on “Cabinet of Curosities Arrives 10/29”