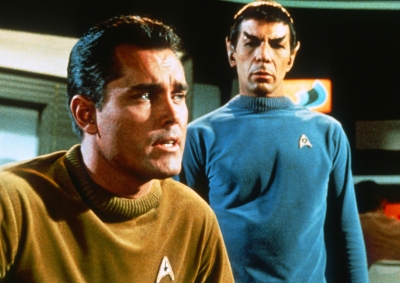 Too much of a good thing? Paramount and CBS have filed a copyright infringement suit against Alec Peters and others involved in making Axanar, a fan-produced Star Trek movie project that raised more than $1 million on Kickstarter and Indiegogo.

Paramount has tolerated other elaborate fan productions over the years, such as the crowdfunded fan films Star Trek: Of Gods and Men, which received $150,000 in donations in 2006 and Star Trek: Renegades, which raised $375,000 in 2014. It may be that Axanar’s budget, or CBS being on the verge of launching its new TV franchise, caused the companies to pull the trigger.

Paramount and CBS gave this joint statement to The Hollywood Reporter:

Star Trek is a treasured franchise in which CBS and Paramount continue to produce new original content for its large universe of fans. The producers of Axanar are making a Star Trek picture they describe themselves as a fully-professional independent Star Trek film. Their activity clearly violates our Star Trek copyrights, which, of course, we will continue to vigorously protect.

The suit asks for statutory damages of up to $150,000 for each separate Star Trek copyrighted work infringed, or actual damages as proved, plus attorneys fees and costs. The suit also asks the court to enjoin Peters and the other defendants from activities that infringe on the Star Trek copyrights.

Alec Peters told The Wrap in August that he and his team had just met with CBS “but the network didn’t offer any specific guidelines concerning what his crew can and cannot do — the network simply told him that they can’t make money off the project.”

“CBS has a long history of accepting fan films,” Peters said. “I think ‘Axanar’ has become so popular that CBS realizes that we’re just making their brand that much better.”

Part of the immediate fan reaction to the lawsuit has been a Support Axanar Petition at Change.org.