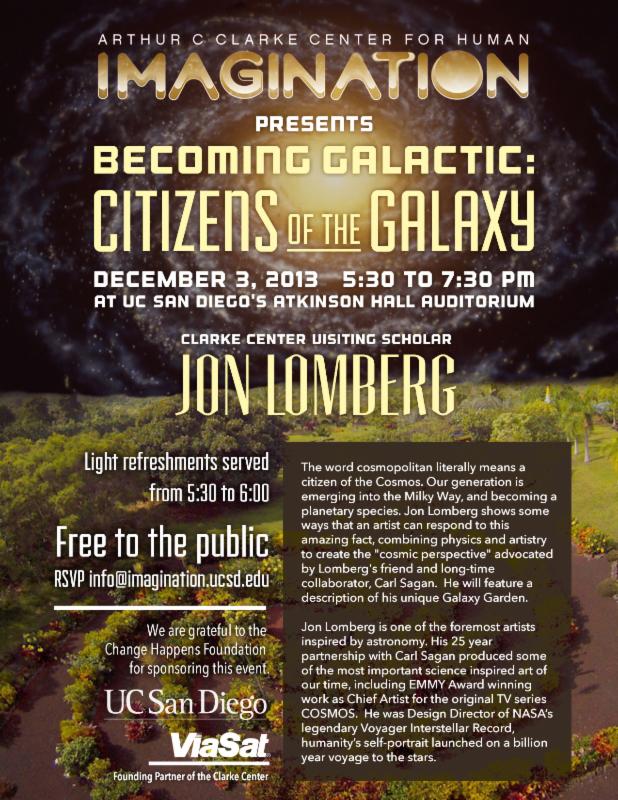 Artist Jon Lomberg, a speaker at the Starship Century Symposium last May, will return to the Arthur C. Clarke Center for Human Imagination at UCSD for two appearances in December.

Jon Lomberg is one of the foremost artists inspired by astronomy. He did Emmy Award-winning work as Chief Artist for Carl Sagan’s Cosmos series. And he was Design Director of NASA’s Voyager Interstellar Record, the self-portrait of humanity now on its way to the stars.

Lomberg’s December 3 presentation is “Becoming Galactic: Citizens of the Galaxy”:

The word cosmopolitan literally means a citizen of the Cosmos. Our generation is emerging into the Milky Way, and becoming a planetary species. Jon Lomberg shows some ways that an artist can respond to this amazing fact, combining physics and artistry to create the “cosmic perspective” advocated by Lomberg’s friend and long-time collaborator, Carl Sagan. He will feature a description of his unique Galaxy Garden.

The Galaxy Garden models the Milky Way to scale with a garden of living things. By now Lomberg’s plantings have reached full size. 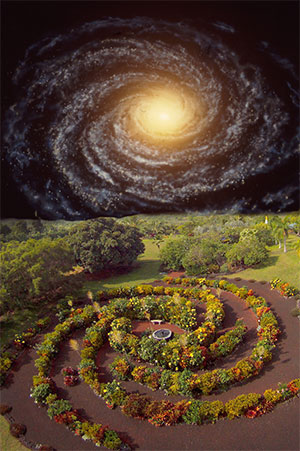 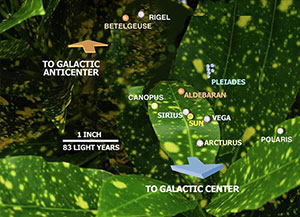 At Lomberg’s second appearance, the Galaxy Garden Workshop on December 7, he will explain how the garden is used to encourage science education, and demonstrate hands-on teaching activities that can be done indoors or outdoors using large-scale, explorable model galaxies.

This event, while open to anyone, is particularly  designed to appeal to teachers in physical sciences grades 4-12, creators of informal science education activities, artists interested in novel art/science collaborations, gardening clubs and astronomy clubs.

The day’s activities will include building a model galaxy with fishing line grid, paper plates, spattered paint, toothpicks, and Play-Dough.