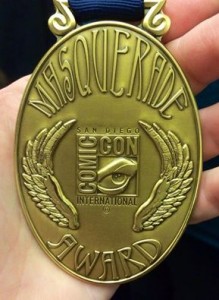 I mention  “Twelve Doctors” because Jean Martin of Science Fiction/San Francisco was part of the group. However, none of the members of this entry are named in the post on SDCC’s Toucan blog – I wouldn’t know if Jean hadn’t announced it on Facebook.

That’s why I’m not copying the rest of the masquerade awards here — unfortunately, the full names of most entrants often aren’t given so File 770 readers would have no way of telling if they know any of them.