The British Library’s exhibition Comics Unmasked: Art and Anarchy in the UK runs through August 19. (Parental guidance required for visitors under 16 years.)

Comics Unmasked is the UK’s largest ever exhibition of mainstream and underground comics, showcasing works that uncompromisingly address politics, gender, violence, sexuality and altered states. It explores the full anarchic range of the medium with works that challenge categorisation, preconceptions and the status quo, alongside original scripts, preparatory sketches and final artwork that demystify the creative process.

Neil Gaiman (Sandman), Alan Moore (Watchmen, V for Vendetta), Grant Morrison (Batman: Arkham Asylum) and Posy Simmonds (Tamara Drewe) are some of the stars of an exhibit that stretches back in time to encompass 19th-century illustrated reports of Jack the Ripper, and medieval manuscripts.

Cheryl Morgan and James Bacon have toured the exhibit and written up their impressions. 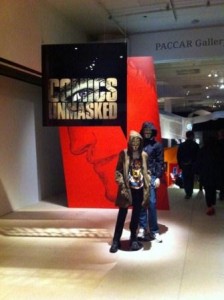 Finally, as we have got onto gender issues, I note in passing that the exhibition space is littered with mannequins dressed as political protesters and wearing V for Vendetta masks. What Alan Moore thinks of that, I shudder to think. On close examination it is obvious that many of the mannequins are female. However, they are small-breasted (especially in comparison with comic-book women) and are all wearing androgynous outfits comprising jeans, t-shirts and hoodies, plus the undeniably male Guy Fawkes masks, and that makes it look like all of the figures are male. I found that rather off-putting.

Morgan also notes there is “a remarkable suffragette poster that I suspect will horrify most modern social justice campaigners.”

Forbidden Planet hosts James Bacon’s text and many photos — “James Reports From the British Library’s Superb Comics Unmasked” includes a photo of that dread poster, by the way. And offers these insights into what the curators are trying to achieve:

Along with Paul Gravett are co-curator John Harris Dunning, Adrian Edwards and Roger Walshe of the British Library. Walshe repeatedly says that he is not apologising for what is on display; this is a strong exhibition that some might find alarming, controversial, but the message here is that comics are not just for kids, and the exhibition is about the message of the media of comics, not any particular genre. Yes, comics are fun, they are a pastime, they are beautiful, they are fantasy, they are powerful, they are a true form of literature, imparting dangerous thoughts and ideas, asking questions of the reader, forcing reflection and consideration, or making laughter.