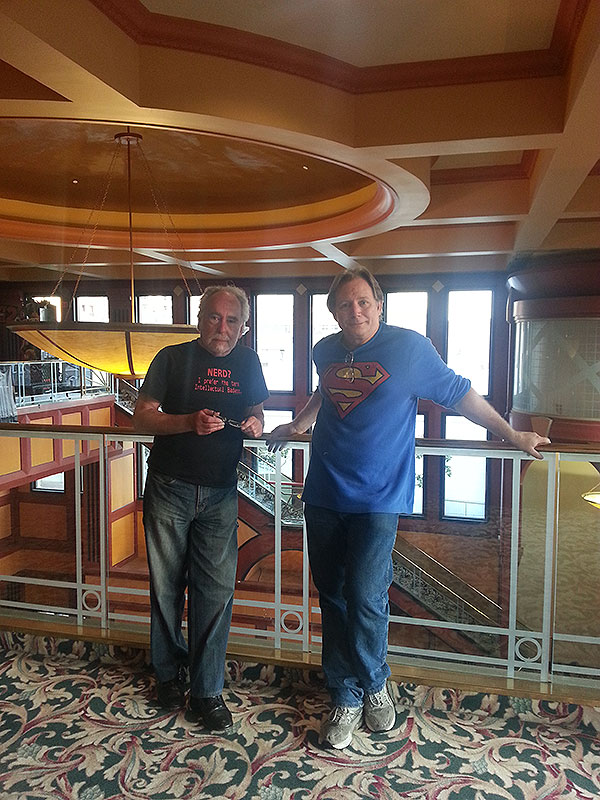 Peter Beagle and Connor Cochran in 2013.

Peter S. Beagle won a round in his lawsuit against his former business manager, Connor Cochran, on November 7 when the Superior Court of Alameda County dismissed Cochran’s countersuit against Beagle. It was dismissed with prejudice, which means Cochran can’t try it again. Meanwhile, Beagle’s suit against Cochran is proceeding, with trial scheduled to begin on January 5, 2018.

Beagle, one of the top fantasists of his generation, and Connor Freff Cochran, the lifelong sf/f fan who became Beagle’s manager shortly after they met in 2001, spent 14 years rallying fans around the author’s campaign to get what he was due from sales of The Last Unicorn movie, and get back other rights controlled by exploitative corporations. Although they succeeded on both counts, the story of their teamwork came to an ugly end in 2015 when Beagle and Cochran sued each other in California courts.

Beagle, now 78, asked for $52 million in damages (or more as determined by the court), disgorgement of illegal gains and restitution, dissolution of two corporations he co-owns with Cochran, and other injunctive relief.

Cochran’s answer and cross-complaint, filed in January 2016, asked the court to dismiss Beagle’s suit as “frivolous, issued without capacity or under undue influence,” and to award damages in an amount to be determined.

Beagle hasn’t been free to go on his way and resell his earlier published works because he had turned over his intellectual property and all of his rights to Avicenna Development Corporation, which he and Cochran formed in 2008 to manage and protect Beagle’s intellectual property rights, each man owning 50%.

The intellectual property held by Avicenna not only includes Beagle’s own works, but also rights in works he inherited from Edgar and Mary Pangborn, from his mother, and the rights in Cochran’s own previously created works.

The judge’s November 7 decision dismissed Cochran’s cross-complaint, and mirror complaints by the corporations, Avicenna Development Corporation, and Conlan Press, Inc., with prejudice, because of prolonged failure to comply with court orders to produce documents and answer interrogatories. The court also renewed its order for Cochran and the defendant corporations to pay $24,915 in sanctions that have remained unpaid since September 2016, and levied an additional $3,060 sanction against Cochran.