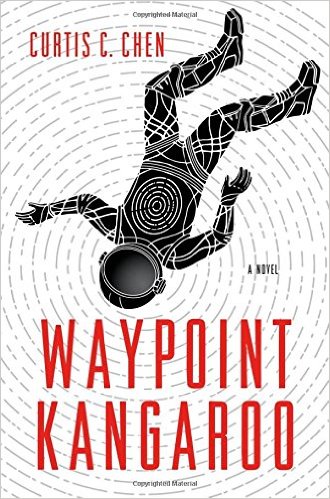 By Carl Slaughter: Debut author Curtis Chen is a Clarion graduate and has studied under Ursula Le Guin, James Patrick Kelly, John Crowley, and John Scalzi. His 2016 short stories have been published in Andromeda Spaceways Magazine and Daily Science Fiction. Waypoint Kangaroo came out in June. The sequel, Kangaroo Too, is set for the summer of 2017. 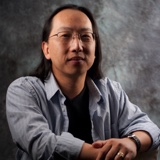 Kangaroo isn’t your typical spy. Sure, he has extensive agency training, access to bleeding-edge technology, and a ready supply of clever (to him) quips and retorts. But what sets him apart is “the pocket.” It’s a portal that opens into an empty, seemingly infinite, parallel universe, and Kangaroo is the only person in the world who can use it. But he’s pretty sure the agency only keeps him around to exploit his superpower.

After he bungles yet another mission, Kangaroo gets sent away on a mandatory “vacation:” an interplanetary cruise to Mars. While he tries to make the most of his exile, two passengers are found dead, and Kangaroo has to risk blowing his cover. It turns out he isn’t the only spy on the ship–and he’s just starting to unravel a massive conspiracy which threatens the entire Solar System.

Now, Kangaroo has to stop a disaster which would shatter the delicate peace that’s existed between Earth and Mars ever since the brutal Martian Independence War. A new interplanetary conflict would be devastating for both sides. Millions of lives are at stake.

Weren’t vacations supposed to be relaxing?

On the way home from his latest mission, secret agent Kangaroo’s spacecraft is wrecked by a rogue mining robot. The agency tracks the bot back to the Moon, where a retired asteroid miner — code named “Clementine” — might have information about who’s behind the sabotage.

Clementine will only deal with Jessica Chu, Kangaroo’s personal physician and a former military doctor once deployed in the asteroid belt. Kangaroo accompanies Jessica as a courier, smuggling Clementine’s payment of solid gold in the pocket universe that only he can use.

What should be a simple infiltration is hindered by the nearly one million tourists celebrating the anniversary of the first Moon landing. And before Kangaroo and Jessica can make contact, Lunar authorities arrest Jessica for the murder of a local worker.

Jessica won’t explain why she met the victim in secret or erased security footage that could exonerate her. To make things worse, a sudden terror attack puts the whole Moon under lockdown. Now Kangaroo alone has to get Clementine to talk, clear Jessica’s name, and stop a crooked scheme which threatens to ruin approximately one million vacations.

But old secrets are buried on the Moon, and digging up the past will make Kangaroo’s future very complicated…