By Mark L. Blackman: On the evening of Tuesday, November 15, 2016 – an otherwise dreary day – the New York Review of Science Fiction Readings Series presented Kij Johnson and Sonya Taaffe  at its venue, the Brooklyn Commons Café in Brooklyn.

The evening opened as ever with executive curator Jim Freund welcoming the audience, cautioning that we were on Livestream (go to livestream.com’s Look At tab, then nyrsf or, for that night, Kij or Taafe), and, after briefly reporting that he broke his phone, announcing future readers:

Finally, he introduced the first of the “two really cool readers,” Sonya Taaffe, whose most recently collected fiction and poetry (her poem “Matlacihuatl’s Gift” won the Rhysling Award) are found in Ghost Signs. 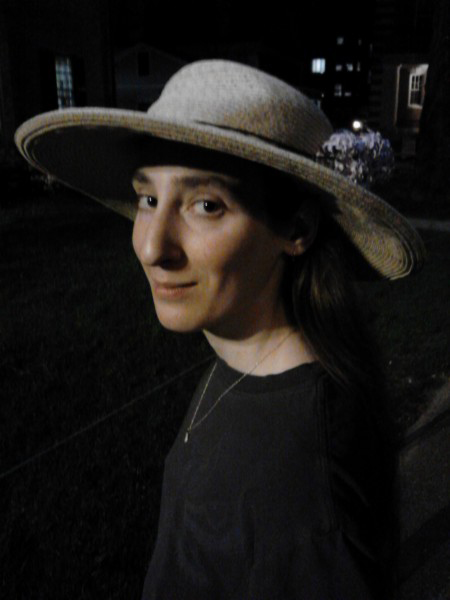 Taaffe (her name rhymes with “strafe”) began by expanding on a tidbit in her bio. When she was in high school, with her father’s help, she built a radio telescope to determine if one could map a small part of the Milky Way galaxy from 42°N (the Boston area); ultimately, this led to her naming a Kuiper Belt Object (trans-Neptunian), Vanth, forthe moon of dwarf planet Orcus. The name comes from Etruscan myth – she “reads dead languages for fun” – a winged deity who guides the souls of the dead to the underworld and who is akin to Charon, and, with that, read a poem, “The Etruscan Prince,” inspired by the discovery of a tomb in Tarquinia and told from the perspective of his consort. Her next poem, “After the Red Sea,” was based on the figure of Lilith, who ran away from Adam to the Red Sea, where she became the consort of the demon Ashmedai. She followed with “When Can a Broken Glass Mend?,” “a story I’m very proud of.” From childhood, a woman encounters a demon in a mirror and a bond forms.

She continued with a series of “ghost poems,” invocations to historical figures, among them Kafka (“The Process”), Alan Turing (“The Clock House”) and a number of ancient Greeks; the first, though, “About Building,” was dedicated to her late grandparents. Addressing the current political climate (the next President was endorsed by the Ku Klux Klan), she brought her “most radical” poetry, describing herself as “a queer Jew, with a uterus, and also a brain.” She invoked Axiothea, a woman who had attended Plato’s Academy (at first disguised as a male), the Sirens, Sappho (in her Aeolic dialect Tsap’pho), the Carthaginians (Carthage’s destruction displeased her – Rome had practices no less barbaric) and Catullus (whose poetry was “seriously filthy,” as was her poem).

On her blog, she related, she frequently writes about film. Her poem “The Ghost Marriage” was loosely based on Black Angel, a 1946 film noir (which featured Dan Duryea, another of her focuses of interest). Not every woman in a noir is a femme fatale or damsel in distress, she pointed out; in some, they are protagonists, independent, even anti-heroes. “Mercury Retrograde Theatre” was for her husband, who writes radio drama (and who was present to be embarrassed). She concluded with “Post-Millennial Augury Blues,” a poem written three nights earlier, after the Election results, expressing her frustration with people who draw parallels between now and the past, imagining themselves into it, often imposing their present-day perspectives and second-guessing (for instance, everyone says that if they lived before the Civil War, they’d “definitely have been an Abolitionist”). (In that vein, she lauded Ernst Lubitch’s To Be or Not to Be, a comic anti-Hitler film which was courageously made before the War’s outcome was certain.)

In a postscript, Freund reminded the audience that they could hear Taaffe another story (“The Trinitite Golem”) as part of the Clockwork Phoenix 5 anthology launch at the NYRSF Readings on April 5th.

During the intermission, a raffle was held (for those who donated), with the prizes being copies of

Ghost Signs and The Dream-Quest of Vellitt Boe. (There was no drawing for an abandoned umbrella.) Freund then introduced the second reader, who was appearing here for the first time. 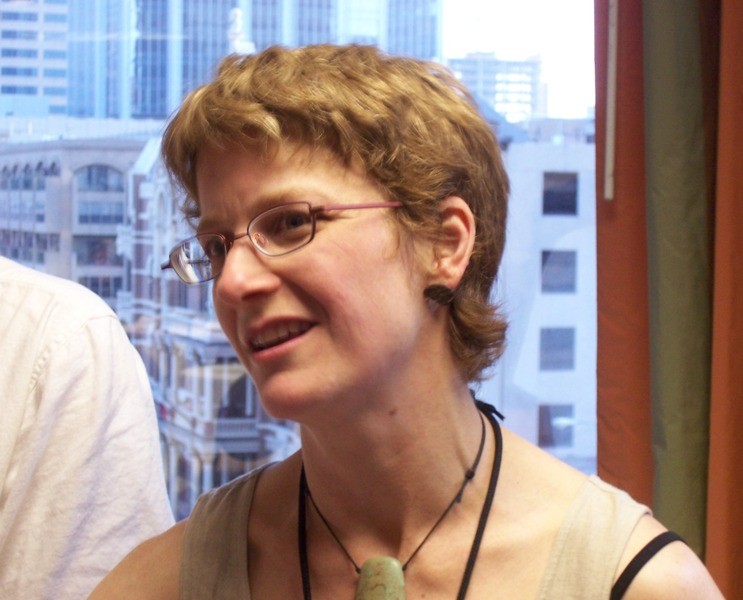 Kij Johnson (from her initials K.I.J., pronounced “Kidge”) has won the Theodore Sturgeon Award (for “Fox Magic”), the IAFA’s Crawford Award (for best new fantasist, for The Fox Woman), the World Fantasy Award (for “26 Monkeys, Also the Abyss”), the Nebula Award (for “Spar,” “Ponies” and “The Man Who Bridged the Mist”) and the Hugo Award (as well for “The Man Who Bridged the Mist”). Her latest books are The River Bank, “a sly response to The Wind in the Willows” and The Dream-Quest of Vellitt Boe (Tor.com), from which she read two selections.

Vellitt, a 55-year-old professor (Johnson said that she was “tired of stories about spunky girls” or “17-year-olds with impulse control changing the world”; she herself teaches at a college and is close to that age) at a women’s college in the Dreamlands, having in her youth been a “far traveler” or adventurer, is sent by her dean to bring back a student who has run off to the Waking World with her lover (the girl’s father is a trustee). There’s also a small black cat (who’s not anthropomorphic and doesn’t talk) and strange things in the seas; the novella, she said, “twists H.P. Lovecraft around.”

Freund reminded that we could make “this fabulous evening relive” on Livestream.

Afterward, the readers and some audience members enjoyed the Café’s fare.