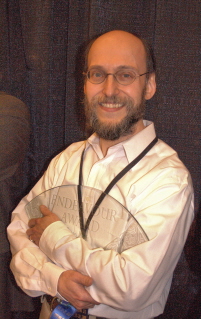 By Carl Slaughter: David Levine has been selling short fiction for 15 years, especially to Tor, Baen, and Analog. He’s been podcasted in Starship Sofa numerous times, plus Pod Castle, Drabblecast, Tales to Terrify, Escape Pod, and Toasted Cake. He’s picked up two Hugo, two Nebula, and two Campbell nominations/wins, plus Sturgeon and a fistful of others.

In 2016, he tried his hand at long fiction. Arabella of Mars, an alternate history steampunk space opera from Tor, came out in July. Arabella and the Battle for Venus is set for July 2017. 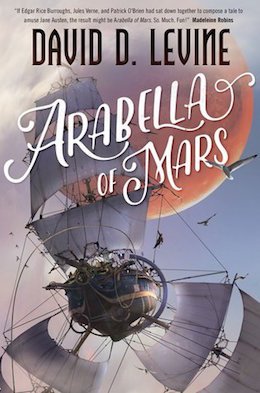 Ever since Newton witnessed a bubble rising from his bathtub, mankind has sought the stars. When William III of England commissioned Capt. William Kidd to command the first expedition to Mars in the late 1600s, they proved that space travel was both possible and profitable.

Now, one century later, a plantation in the flourishing British colony on Mars is home to Arabella Ashby. A tomboy who shares her father’s deft hand with complex automatons. Being raised on the Martian frontier by her Martian nanny, Arabella is more a wild child than a proper young lady. Something her mother plans to remedy with a move to an exotic world Arabella has never seen: London, England.

Arabella soon finds herself trying to navigate an alien world until a dramatic change in her family’s circumstances forces her to defy all conventions in order to return to Mars in order to save both her brother and the plantation. To do this, Arabella must pass as a boy on the Diana, a ship serving the Mars Trading Company with a mysterious Indian captain who is intrigued by her knack with automatons. Arabella must weather the naval war between Britain and France, learning how to sail, and a mutinous crew if she hopes to save her brother from certain death.