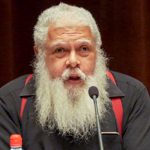 Samuel Delany will be the Katie Jacobson Writer in Residence at CalArts in Los Angeles next week and while he is in the city he will be doing a public reading at the Roy and Edna Disney/CalArts Theater on Saturday, November 15.

A pathbreaking, taboo-busting titan of literary science fiction since the New Wave of the 1960s, Samuel R. Delany is a member of the Science Fiction Hall of Fame and holds four Nebulas, two Hugos, and the Bill Whitehead and Lambda Awards for lifetime achievement. Delany’s novels include Nova (1968), Dhalgren (1975), the Return to Nevèrÿon series (1979–87), Hogg (1995) and the Stonewall Award-winning Dark Reflections (2007). His short stories have been collected in Aye, and Gomorrah, and other stories (2003), while his nonfiction includes the memoir The Motion of Light in Water (1988).

REDCAT is located in the Walt Disney Concert Hall complex at 631 West 2nd Street, Los Angeles. The event begins at 3:00 p.m. General admission tickets cost $10 and student tickets cost $5 (apart from CalArts students/faculty/staff who get in free.) Tickets can be purchased online here.