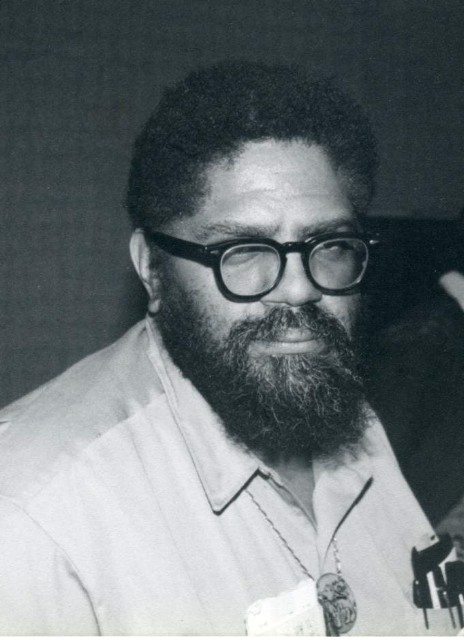 Elliot K. Shorter at HexaCon, in 1980, a convention in Lancaster, PA. Photo by © Andrew I. Porter.

Legendary fan Elliot K. Shorter died from complications of cancer on October 1 after spending his last days in hospice care. Shorter, who once stood 6’ 4” and served as a military policeman with the U.S. Army in Germany, started attending conventions in 1962 and was one of the few African-Americans in Sixties fandom.

Always visible at a convention or fan gatherings due to his height and girth, with or without a guitar slung on his back. But the important thing about Elliot is that he is fun! Fun to talk with, sing with, get drunk with, turn a mimeo crank with.

He won that TAFF race over Charlie Brown and Bill Rotsler, in the process becoming one of the 1970 Worldcon guests of honor. Heicon had decided prior to the convention to select the TAFF winner as its Fan GoH.

His was a name to conjure with among LASFSians when I joined the club in 1970 because at the previous year’s Worldcon he had confronted another force of nature, our eminent local genius Harlan Ellison. Decades later James Frenkel recalled that scene at St. Louiscon for Tor.com —

During the masquerade, some guy with a sword had managed to find a seam in the big movie screen that nobody retracted while costumed people tromped across the stage. $1500 worth of damage to the screen ensued. So Harlan suggested that we all chip in a buck to help fix the screen. With 1600 people there, that would work. And it did, eventually. Of course, it’s hard to make sure there’s EXACTLY enough money for the purpose. There was, in fact, more money passed to the dais. What to do with the extra money?

Harlan suggested that it be donated to the very new Clarion Writers Workshop. He was (of course) an eloquent advocate for this cause, a workshop devoted to fostering the SF writers of tomorrow. Sounded good to me…but not to everyone. That was when Elliot Shorter, a bookseller, a New Yorker, a very, very tall, imposing man of color whose bulk rose more than a full foot over Harlan as he stood up and said, in his surprisingly high-pitched but at that moment quite audible and angry voice, “Now wait just one darned minute, Harlan.” There followed a rather dramatic moment in which Elliot advanced on Harlan, and many in the room held their breath…

Elliot quite reasonably pointed out that people had sent their dollars up to the dais to fix the screen, not to support Clarion, and it wouldn’t be fair to simply take the excess for a different purpose without first asking the assembled multitude if this was what they preferred. After a certain amount of fannish discussion it was finally decided to use the extra money to establish the Worldcon Emergency Fund, for things like emergency screen repair and other possible Worldcon needs. This has come in very handy on occasion, most notably when a Worldcon in the early 1980s wound up with a significant financial shortfall.

He was among the Founding Fellows named to the Fellowship of NESFA in 1976.

He joined the Society for Creative Anachronism (SCA) in 1968 where he was known as Master El of the Two Knives. He was part of the Barony of the Bridge (established 1973) longer than anyone else.

He worked on his friends’ fanzines, helping to produce issues of Locus and Niekas. He wrote the beginnings of his TAFF trip report for The Spanish Inquisition (1976) but it remained unfinished.

He served NYCon 3, the 1967 Worldcon, as Sergeant-at-Arms and was immortalized in Jack Gaughan’s NYCon3 Comics. Andrew Porter explains the issue’s cover —

Shorter is shown walking down the ramp holding another NYCon committee member, rich brown. I’m the big guy in the back, with glasses. The others on the ramp, from the bottom, are Ted White, Dave Van Arnam, Mike McInerney, Robin White, and John Boardman. 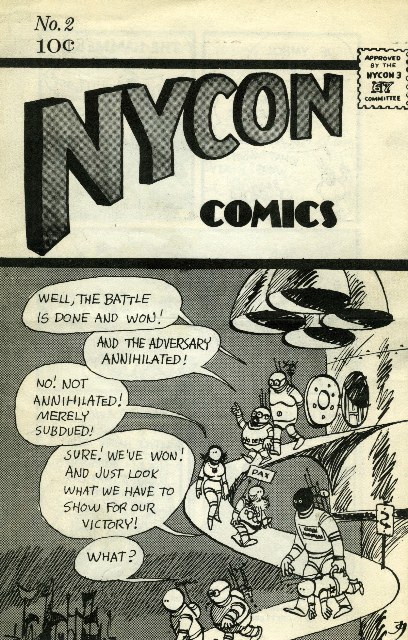 As Parliamentarian of Noreascon I (1971) he perfected the wording of a new rule that allowed mail-in site selection voting for the first time.

He was part of the “7 for 77” bid committee, a slate of East Coast fans who proposed to run a Worldcon in Orlando. They won, but their convention hotel went bankrupt and refused to honor its contract, causing the Worldcon to move to Miami Beach.

For awhile Shorter ran Merlin’s Closet, a bookstore opened in 1979 in Providence, RI which specialized in SF and fantasy.

As a public figure, Shorter operated in dynamic tension between people’s sense of affection and intimidation, which led to many dramatic moments in his fannish resume.

Before the start of the Discon II Masquerade (1974), when emcee Jack Chalker announced “No flash photography,” someone in the audience (by pre-arrangement) stood up and took a photo using a flash. Michael J. Walsh describes what happened next —

Jack looked pained, called out and from either side of the stage came Elliot and one other linebacker sized fan. Into the audience they went, the camera (a prop of sorts) was rather publicly broken, the miscreant dragged up on stage and then off stage. Whereupon loud thwacking sounds were heard along with cries of pain.

Oddly enough there were no flash photographs taken during the masquerade.

My favorite Eliot Shorter moment occurred one evening when I met Eliot and some other folks for supper in Harvard Square, after they had been participating in some sort of SCA event on the banks of the Charles. We went to The Stockpot, a salad-bar-and-soup restaurant, and at the end of the salad bar, there were some loaves of bread, along with knives for cutting slices of bread. Eliot tried using one of these flimsy bread knives, and became quickly frustrated with its lack of effectiveness, and muttering something like the Crocodile Dundee “That’s not a knife. This is a knife.” line, innocently pulled a large, and very sharp, knife from its scabbard on his belt, and used it to cut himself a slice of bread. The looks on the faces of the elderly couple next to him as he pulled out his knife were priceless. They calmed down a little bit when they realized what he was using the knife for, but I don’t think they had fully recovered from the shock by the time we left.

Shorter was fictionalized as “George Long” in the Niven/Pournelle/Flynn novel about fandom, Fallen Angels. Some believe he is also the model for “Shorty Mkrum” in Heinlein’s The Moon Is A Harsh Mistress.

Prior to his final illness Shorter spent the last five years in declining health, suffering the amputation of a foot in 2008, while cared for at VA and other hospitals. 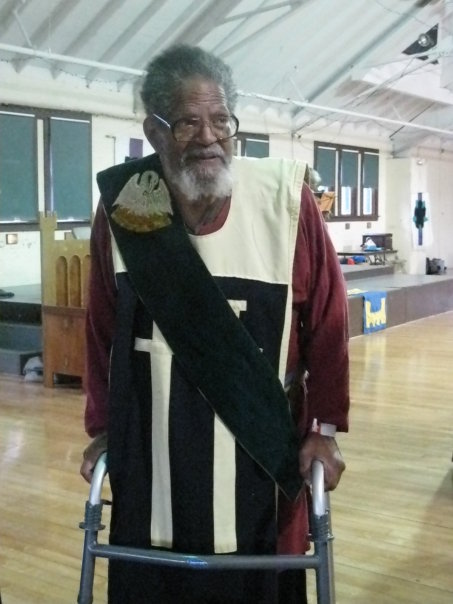 [Thanks to Andrew Porter and Vijay deSelby-Bowen for the story.]