So, every single issue of FIYAH magazine was removed from @Goodreads, ostensibly because MAGAZINE, but Uncanny, Clarksworld, Fireside, and many others still remain.

Wonder what the difference could be? https://t.co/YlffKVIOZJ

An attempt to discuss the decision in the Goodreads Librarians Group was answered with “a literary magazine is not a series by GR standards,” which apparently is Goodreads’ policy. However, that did not explain why FIYAH’s Series entry was singled out for enforcement while entries for many other genre magazine Series remain undisturbed. Put pretty much any spec fic magazine in the search bar, and they’re all on Goodreads: Clarkesworld, Lightspeed, Nightmare, Asimov’s, Analog, F&SF, Uncanny, Apex, Beneath Ceaseless Skies, Strange Horizons, Fireside Magazine, Shimmer, Interzone, Forever Magazine, even all four issues of the new Pulphouse and the single issue of the new Amazing Stories.

When someone raised the challenge in the Goodreads Librarians Group that the decision to delete FIYAH might be motivated by racism, a Librarian Moderator closed the thread to further comments.

The FIYAH Series entry can still be seen via a Google cache file (while that lasts.) Here’s a screencap — click for larger image. 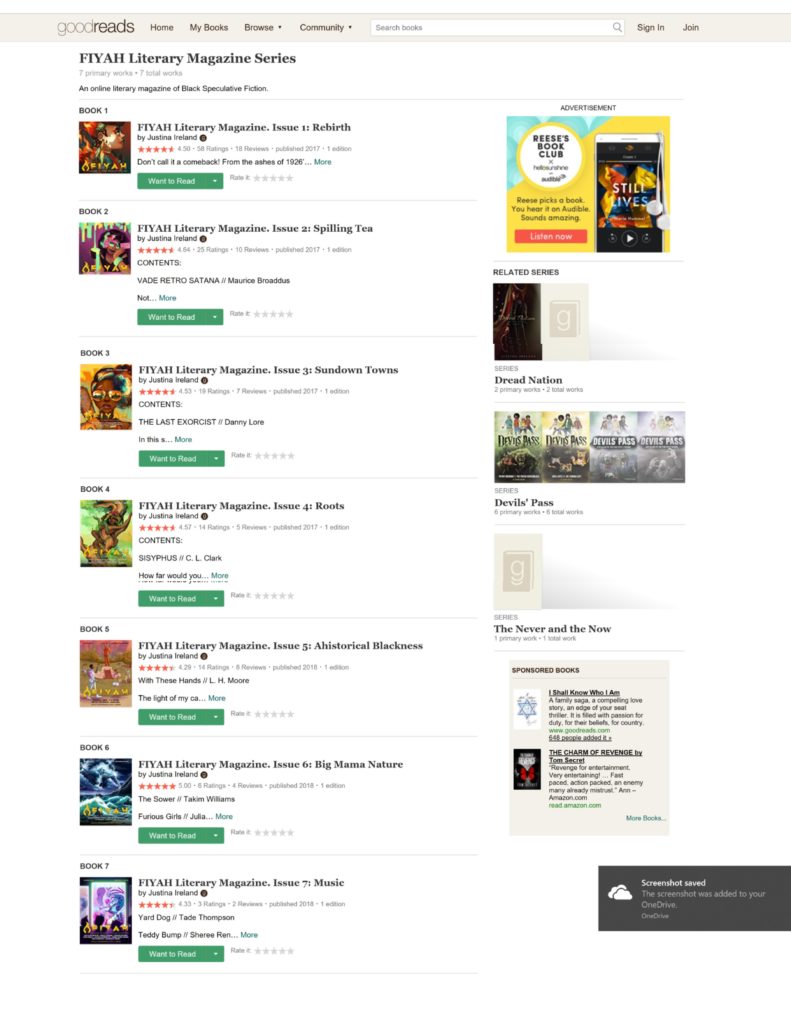 Ok @goodreads, this that bullshit. To close a thread because you don’t want to even CONSIDER the possibility of racism at play, or allow any discussion thereof, is in and of itself racist. Y’all need to come correct. pic.twitter.com/JyljwXfcN7

And I have to be honest, I'm pissed. Folks want to tell us the system is fair at every single turn, that we're misinterpreting the data, but this is the kind of shit Black people have to deal with even if they try to do for self.