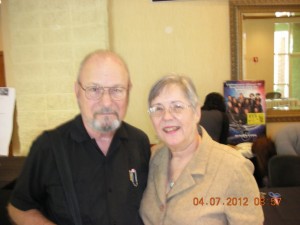 By Francis Hamit: LepreCon 38, held April 5th through 8th in Tempe, Arizona, was, in many ways, a return to the kind of science fiction/fantasy convention that got me into Fandom in 1978.  Leigh and I have not been going to many conventions in recent years, so this was only my 108th.  The WorldCon in Reno, where we spent almost all of our time in the poker room at the Peppermill, was one of two we attended in 2011, followed by Bubonicon in Albuquerque a week later.  Neither was the kind of friendly, welcoming experience you want to repeat and both carried a sense of ‘been there, done that’ that made us wonder why we’d bothered.  Certainly it was not money well spent, but since it was part of a longer book tour, we endured anyway.

LepreCon 38 invited us, and wanted us both on the program, and we hadn’t been to a previous one for many years.  But we remembered those kindly as small relaxicons where interesting programs and great conversations were to be had.  Tempe is where Arizona State University is, and the hotel, the Tempe Mission Palms, is right next to the campus and the Mill Street neighborhood half a block away reminded me of Iowa City when I first lived there in the  mid 1960s.  Very mellow, positive vibes.

The hotel is also very fan friendly, with a very soft security posture, great rooms and plenty of opportunities for that writers’ sport of people watching.  It is an aircrew and military pilot hotel, with a good restaurant.  One need not leave the whole weekend, but if one does, Mill Street is nearby.  I made early morning pilgrimages to the local Starbucks.

Patti Hultstrand did an outstanding job of putting together a program that would do a much larger convention proud.  Some panels, unfortunately, outnumbered the audience, and some were cancelled because no audience appeared. This was especially true for readings where one lesser-known author after another found themselves addressing an almost empty room. One of the frustrations for panelists I heard more than once was that a panel they wanted to attend was often opposite one they were on, which might account for the low attendance at so many of them. I was in five events, but only made one panel as audience member.  It was a very diverse program with lots of options, but perhaps, next time, “less is more”?

I have the impression that a much larger attendance was anticipated than actually came. Certainly there were almost none of the usual suspects from Los Angeles , which is only a seven hour drive away.  Aside from myself, my roommate and editor Leigh Strother-Vien, and Michael Donahue, I don’t recall seeing another L.A fan there.   That might be because of the current economic problems, but it’s a pity because it was a very good event.

Mike Donahue only came over for one day, and that was because the convention very kindly scheduled a panel with the both of us about our forthcoming motion picture Marlowe, which is based on my 1988 stage play, “MARLOWE: An Elizabethan Tragedy”.  Since becoming a film director, Mike has thrown himself into one low-budget project after another and now is in various stages of completion with three features. Only one, Pool Time, has been released.  Complicating matters was the looming demise of Barry Workman, a close friend of his.  But people were very interested and showed up for that panel, which is helpful in creating “buzz”, and we also sold a few copies of the first-draft screenplay at a signing and from a dealer’s table.

I was also on a military-related panel with Joe Haldeman, who was the Author Guest of Honor.  So were seven other people.  Joe being there was another reason for me to attend.  He and I were classmates at the Iowa Writers Workshop in the 1970s.  We were on a similar panel at the 2008 WorldCon in Denver, after which he became very ill.  He was a combat engineer in Vietnam and Agent Orange put him in the hospital with a near-fatal bout of pancreatitis.  In Reno he was still obviously suffering from the aftermath, so it was very good to see him looking healthy again in Tempe.  I had been worried about him.  I had my own illness last fall, after Reno, not as serious, but still very scary.  The panel was nine guys who’d all been in the military, and started by outnumbering the audience, but eventually filled even.  Joe and I were not the only ones on that panel old enough to be Vietnam veterans.  There were a surprising number of ex-military, some of them with long careers, on the program and at the convention.  It gave us something to talk about.  War stories were exchanged.  Nor was it entirely a male conversation.  There were at least two other female veterans aside from Leigh.

The proximity to ASU should have drawn some new fans, but there was a noticeable “graying of Fandom” at work.  Very few kids and very few young adults and teenagers. The hotel is a little on the pricy side, but the security was kind enough to look the other way from those who chose to sleep in the courtyard or some of the smaller lobbies. The convention security, colorfully designated “The Watch”, was also abundant and well-run.  Steve Lapota, another ex-combat engineer in Vietnam , was in charge and also a genial host.

The media guest of honor was Steven Furst, of Animal House and Babylon 5 fame, and he was, if not entirely one of us (I am told it was a paid appearance), an interested tourist who decided to throw an Animal House style Toga Party.  That was right after my third panel of the day and, in deference to my own months-long recovery from complex pneumonia, I went to bed instead.  Mr. Furst also gave panels on film directing and related topics.

The Green Room/ Staff Lounge and the Consuite were at opposite ends of a long hallway on the second floor and on the other side of the hotel from the room where Leigh and I were staying.  Some of the function rooms with program items were also there, while the Dealers’ Room, Art Show and Registration were across the courtyard on the ground level.  It made for a lot of walking, but was not as tiring as it might have been.   Con-kibble was plentiful, as were sandwiches and hot entrees, and a generous selection of soft drinks and bottled water.

So this was, for me, a return to the kind of convention that first got me to be a convention-going fan.  These days, age and health have a big impact on whether or not we’re going to go to one, and like, Jerry Pournelle, I’m not inclined to go unless I can contribute by being on a program item or two…and sometimes, not then. (We no longer do LASFS events.)

But this was one I’d be happy to repeat. Everyone was very nice, and no one was promoting any kind of agenda or trying to bully anyone else.  Fandom the way it used to be. 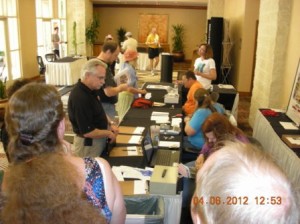 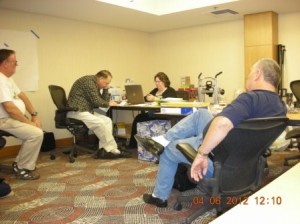