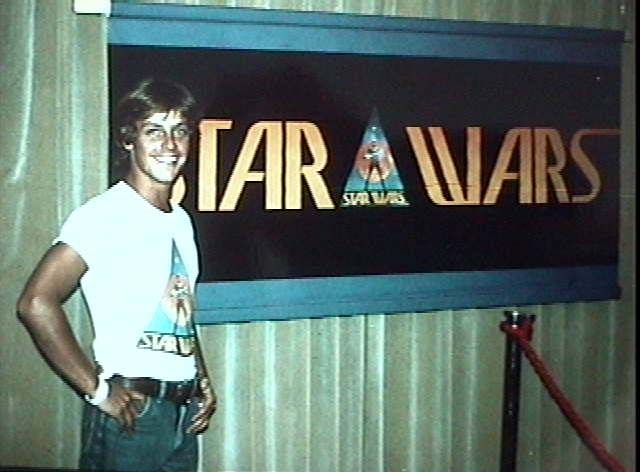 Mark Hamill at MidAmeriCon in 1976.

Luke Skywalker turns 60 on September 25 – can you believe it?

Mark Hamill, born in 1952, began playing the iconic role over three decades ago in the original Star Wars (since retitled Star Wars plus-or-minus 3, if I recall.) And in those days everybody in the production company worked overtime to interest fans in their movie because it wasn’t even a sure bet to be released!

Hamill and producer Gary Kurtz traveled to MidAmeriCon, the 1976 Worldcon, to make the appeal. They did a Q&A together and Hamill posed with the exhibit of art and props from the movie. Nobody knew who he was yet. The convention daily newzine got his name wrong and came back with a correction in the next issue: “It’s Mark Hamill, not Mike Hamill …”

The editors of Rocket’s Blast Comic Collector interviewed Mark at the Worldcon and took the accompanying photo. The interview appeared in their October 1977 issue – six months after the release of Star Wars, by which time every sf fan knew his name.