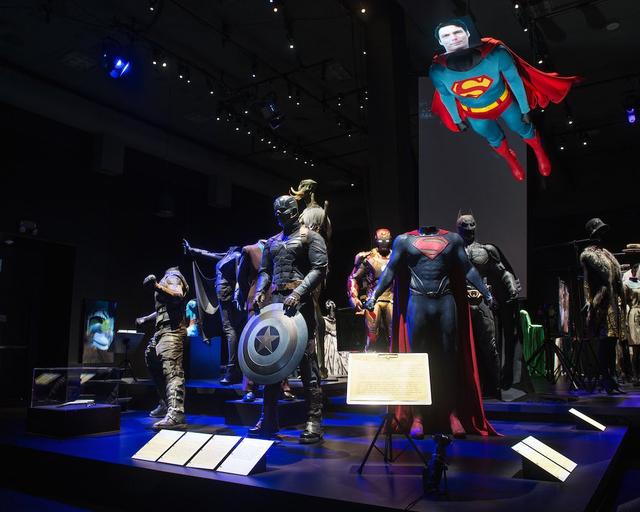 Last weekend my daughter Sierra and I visited the Hollywood Costume exhibit and saw some of the most famous clothing ever worn in the movies, over 100 costumes in all. It’s in the old May Company Wilshire building, now being converted into the new home of the Academy of Motion Picture Arts and Sciences.

Sierra, a seventh grader, told me she was most impressed to see —

1. Dorothy’s gingham dress and ruby slippers from The Wizard of Oz – (She recently started reading the series);

2. A Roaring Twenties-style dress worn by Lina Lamont (Jean Hagen) in Singin’ In The Rain – a movie Sierra watched daily for weeks when she was 3; and

While I have my own favorites that I’ll discuss in a moment, what really impressed me the most is how far museum exhibits have advanced because of the things curators can do with tablet computers and video projectors. The expected mannequins were often topped with a color image of the performer’s head shown on a strategically-placed tablet. Items were identified not only by the usual static signs and labels, sometimes the signboards were used as screens to project some remarkable animated script excerpts — what looked like typewritten text done white-on-black, with passages of dialog and directions progressively magnified for viewing at reading speed. The curators also made impressive use of video tables to bring alive designs, photos, sketches and other virtual artifacts.

We entered through a dark corridor where most of the light comes from a display of designer Edith Head’s many Oscars and stepped into the blinding Technicolor glare of a big screen looping movie clips of the featured costumes. 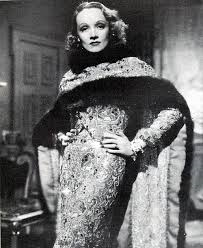 Just around the corner was the first rank of mannequins, one attired in Charlie Chaplin’s suit, derby hat and bamboo cane from The Tramp, another wearing Mary Poppins’ entire rig from sensible black shoes to parrot-beaked umbrella, and more. The most eye-popping of these was the highly detailed, bejeweled and lavishly decorated dress Marlene Dietrich’s character wore to the opera in Angel (1930) –  I can hardly imagine how well the camera captured its beauty in a movie shot in black-and-white.

The section of the exhibit I liked the best was devoted to an awe-inspring juxtaposition of costumes worn by royalty and courtiers with movie clips of Flora Robson, Bette Davis and Cate Blanchett as Elizabeth I, plus Marie Antoinette and others. These mannequins were on a slightly raised platform and set at varying distances from the viewer so that it took little effort to imagine I was standing in the midst of a royal levee. 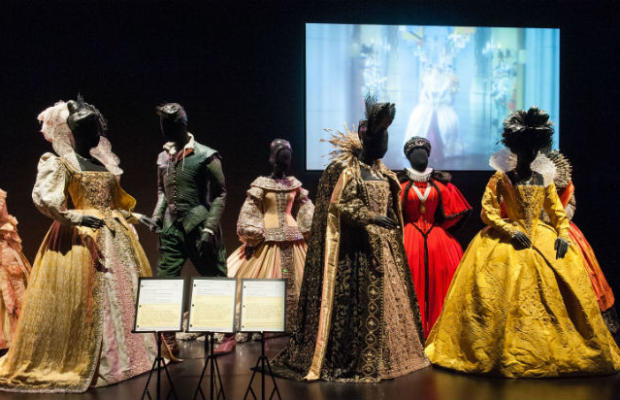 There was an aisle devoted to Meryl Streep’s costumes and roles – Sierra only recognized her as Julia Child, which was not surprising.

The greatest technological tour-de-force accompanied the dress worn by Tippi Hedren in Hitchcock’s The Birds with video recollections by the actress, a video table of related material, and a special effect involving an empty birdcage and the animated shadows of a pair of lovebirds.

Everywhere clothes were paired with quotes and video interviews with designers, actors and directors. There’s an entire wall devoted to Indiana Jones’ leather jacket and fedora from Raiders of the Lost Ark, partly because they’re film icons, and partly because their designer Deborah Nadoolman helped organize the Hollywood Costume exhibition.

Superheroes of different vintages are heavily represented – both the Christopher Reeve and Man of Steel Superman, Christian Bale’s Batman suit, and Captain America. And I have a brand new appreciation for the 9-foot-tall Tars Tarkas of John Carter after seeing him tower over me.

I have only two criticisms of the environment the curators have designed. There’s a special musical score by British composer Julian Scott that plays throughout the hall, a rather overwhelming background noise but probably necessary to isolate the recorded talking heads by making it possible to comprehend them only when you’re in front of the related installation. And the series of corridors entering the exhibit are blacker than the bottom of the coal mine where Big Bad John is buried – it bothered me quite a bit that I couldn’t see where I was walking. The purpose, obviously, is to quickly adapt visitors’ eyes to the light level of the exhibit – by the time we left I had no trouble navigating those same corridors on the way out.

Overall I enjoyed seeing such a rich selection of historic and culturally significant costumes framed by well-chosen technological innovations.

(For a full set of photos released by the Academy, see The LAist.)