Panorama image of the Outreach area during set up.

By James Bacon: Dublin Comic Con (DCC) has been growing over the last number of years, and this year moved into the Convention Centre Dublin, expecting 15,000 attendees. For the 8th and 9th August this year, SF Outreach attended Dublin Comic Con to spread the world about fandom by giving out free books to attendees.

It’s so good to be home, and it’s so nice to be at a convention that is being run well, and attracting such a large indigenous interest. A Dublin Radio station set up their broadcasting unit outside and national newspapers gave DCC huge coverage in the run up, so there has been good publicity.

As well as comics, which are well represented, authors, actors, and industry professionals are all present. Comic Cons are increasingly becoming a place for fans to gather for networking, fun and a celebration of the popular cultures that they love. Reading and a love of books is a huge part of this, and Dublin comic writer and YA author Michael Carroll, who had a table upstairs in the convention, sold out of copies of his work on both days.

With 2,500 books at their fingertips, SF Outreach Ireland were given six tables in the main foyer of the Convention Centre. Many publishers threw their weight into the project. They understand that at a comic convention, there are indeed many willing readers, so Angry Robot, Gollancz, Hodder O’Brien Press, Penguin and Tor all provided many (many!) boxes of stock for us to give out. As well as this, personal donations were made. Local business and authors threw their lot in with us and donated to the cause. We ended up with the SF section from the Hackney London Library that had sadly closed, and also a large donation of SF magazines from the estate of Dublin fan Mick O’Connor. The Dublin branch of Forbidden Planet gave us a stack of comics, and during the convention, authors who had seen what we were doing popped by and gave us signed copies of their work. This meant we ended up with a lovely selection of books and items of interest.

Our plan is straightforward. We want to attract attendees of events like DCC to conventions which they may never have heard about. We are all fans, including the organisers of the Comic Con, and we feel there is space for all interests. The free book encourages reading, and allows us to chat with people as they browse, telling them all about fandoms and events that they may not have heard of. And hidden round the back, we had a special ‘secret’ selection of books for children and younger readers, to make sure that everyone can find something suitable and accessible to enjoy.

At the tables we had 15 volunteers on Saturday and as many on Sunday, with representation from Eirtakon, Mancunicon, Nom-con, Octocon, TitanCon, Anime Dublin, Games Expo and the Dublin 2019 Worldcon Bid. Michael Carroll, who is a guest at the Comic City Creative Arts Festival in Derry dropped off some books, and we got flyers from Kaizoku-Con, PotterFest Galway and the Irish Discworld convention.

The Irish government is supporting the Dublin2019 Worldcon Bid, so this meant that there were  materials on hand for that. I had come by a more international selection of flyers left over at Eastercon, and outreach members also mailed local conventions and asked them to send promotional material. Which was grand – especially as they also sent volunteers on the day! Dublin Comic Con gave us the awesome space, and supported what we were doing and we received financial help from Octocon, Shamrokon and SF Outreach in the US. 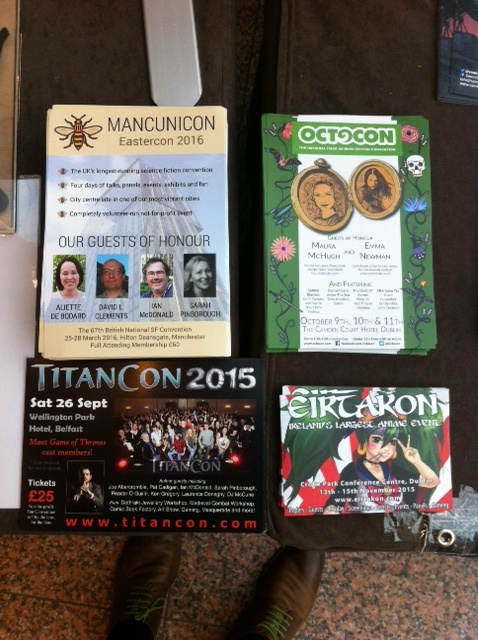 Getting the flyers out.

On Saturday, 1,500 books were put out. By close of business, there were four left. The rest of the books were kept for Sunday, so those attending just for one day would have the opportunity to get their own book chat. At the end of Sunday, everything had been taken but people were still coming over to talk, take flyers and find out more about us.

The response was not only positive but heart-warming. So many people were super excited to see the variety of books, and were then faced with the quandary of which one to choose. This terrible choice plagued many fans, as they tried to choose between titles. The engagement was surprising, and so flyers, memberships, supporting memberships and sign ups to volunteer were more active than I had ever expected, and indeed have experienced in the past at UK outreach events. 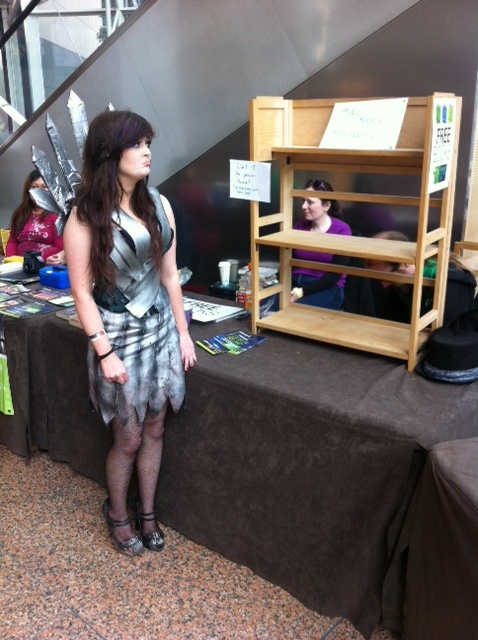 A disapointed Throne with empty shelves.

Seeing the potential Worldcon venue in action was also exciting for me. The main hall at the CCD (The Forum), is a mix of dealers and displays. There is huge interest in Ireland in building life scale dioramas, scenes, costumes and props. The Walking Dead, Wasteland, Star Wars, Alien vs. Predator, all had sets to pose in, or get scared in, or walk through and experience. There was of course a De Lorean present – given this iconic car was built here in Ireland – and the roar from the engine when it was moved into position was incredible.

There was a two stream programme, so it was good to hear the acoustics in both programme rooms. The Liffey; the second largest open space in the venue, was used for Artists Alley, guest comic artists, the celebrity signing areas and queues, and a number of interactive elements; again an interesting use of the space.  Connections are all important, so we had arranged for Outreach materials to be given to anyone who asked a question. And of course, all our items had bookmarks and flyers tucked inside.

From a technical standpoint, I got to see how the in-house team worked. The venue hire of the CCD comes with security, hosts, management and a technical team. Watching them in action was impressive. They were professional and speedy, and when we asked for power ourselves, within minutes a floor panel had been adjusted and we had a four bar power extension. Quick and easy. Karl and Derek, who organised the Comic Con, are keen to pass on any learnings they have to the Dublin Worldcon Bid Team, and this type of co-operation is fabulous.  The plan is for Dublin Comic Con to be here for the future, and of and our intention is to continue with our Outreach work, allowing us a chance to get to become familiar with the venue when it is in use.

All cons are different, of course, but the similarities here are good to see – everyone is a fan of something. There was a lovely relaxed atmosphere, and this was demonstrated by Michael Rooker wandering around the Dealers Room, engaging with fans in a fun way. Occasionally the man who played Yondu in Guardians of the Galaxy looked liked he would be mobbed, but he got about with ease and skill, and it was unusual and quite lovely to see such engagement.

There was a lot of worldclass cosplay on show; it was really very impressive, and given I was at San Diego not that long ago, I say this with a sense of honest objectivity. I was dressed as The Glimmerman myself, an Irish Comic book hero from the League of Volunteers, and one of our other volunteers came as Victoria from Brian Kesinger’s ‘Walking Your Octopus’. It was great to meet so many fans, who had given cosplaying a go, and even the rain held off to oblige.

Most of all though, it was meeting fans, chatting and talking about the cons. There was a good time here and we did good work. 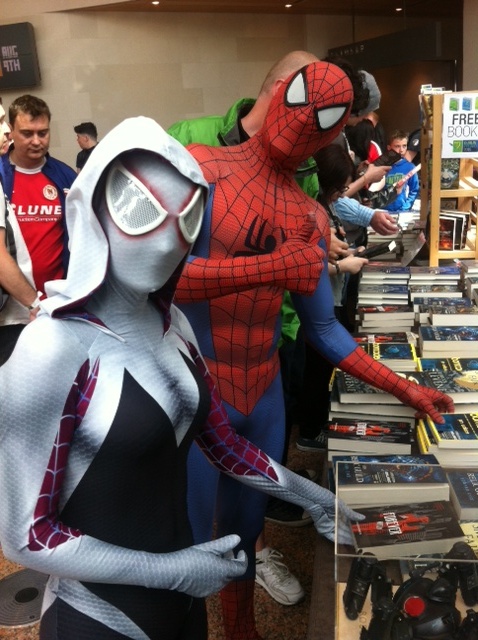 Jerry and Annis as Spidey and SpiderGwen. 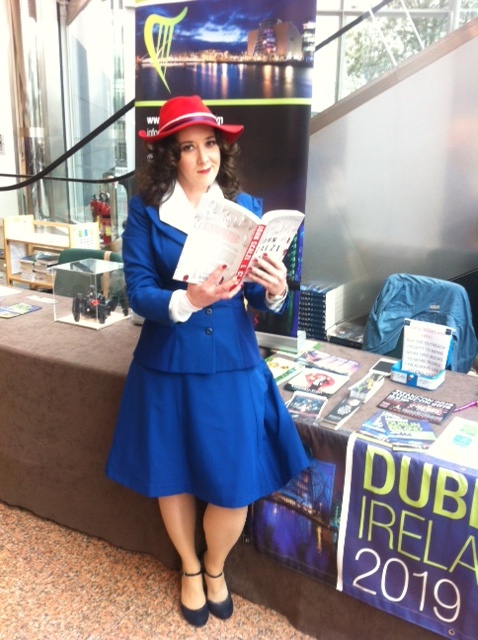 Eamon and Evan Elders as Sheriff and Son.

27 thoughts on “Home Is Where the Heart Is: Outreach in Dublin.”